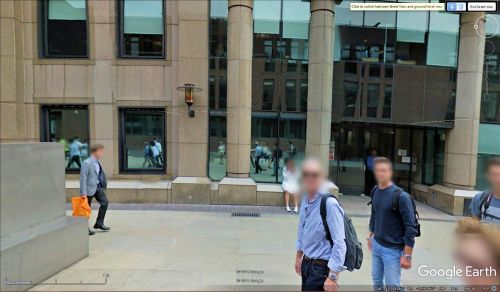 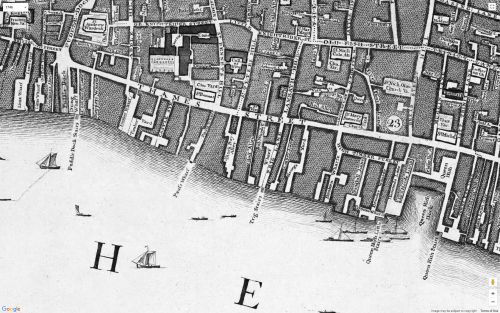 Harben in his entry on the locality refers to Ogilby and Morgan's 1677 map of London, but Robin Hood Court is not included on copies of the map available online.[1] A New Complete Guide to all Persons who have any Trade or Concern with the City of London lists the locality as 'Robin Hood's court'.[2] It is included in a list of London streets and localities in the Compleat Compting House Companion (1763) as 'Robin Hood court'.[3] See further the Gazetteers section below. The court disappeared when Trig Wharf was made.

This Street [sc. Thames Street] enjoyeth a good Trade, and hath a great Resort, occasioned by the several Wharfs on the Water side: and therefore much pestered with Carts. Black Boy Alley, long and narrow, having a great Diers at the lower end. Boss Alley, also long and narrow, with a Diers by the Thames side. Betwixt this Place and Black Boy Alley, is a large passage to Wood Wharf. Robin Hood Court, but very ordinary. Trig Stairs, so called from the Stairs on the Water side, which is indifferently well supplied by Watermen. The Lane is pretty open, reasonably well built and inhabited. Castle Lane, pretty broad for Carts, having a Wood Wharf at the lower end; the Buildings are but ordinary, as are the Inhabitants. George Yard, being good and large, and taken up by Timber Merchants and Wood Wharfs at the lower end. Broken Wharf. By this is a Water House to convey the Thames Water in Pipes. Which of late Years hath been much improved, as to the Revenue, to what it was at first, by the Industry of those concerned therein; but not managed without a great Charge, in keeping so many Servants, and Horses for the forcing the Water up into the Cistern at the top of the Building, which is very lofty.[4]