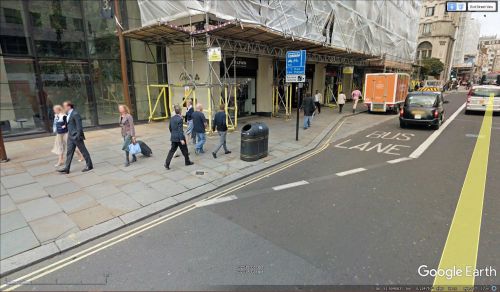 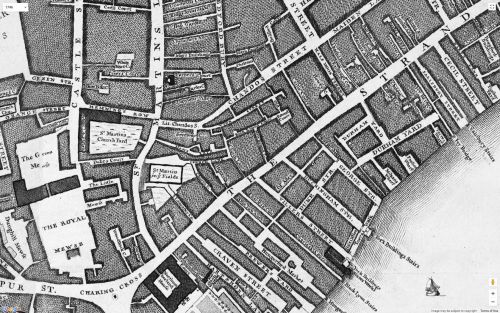 Detail of John Rocque's 1746 Plan of London, centred on the site of Robin Hood Court in the space between New Round Court and Church Lane / Locating London's Past: John Rocque's Plan.

Robin Hood Court near St Martin-in-the-Fields only appears to be recorded from 1682 to 1728.

The earliest reference is William Morgan's 1682 map of London, where the form 'Rabinhood Court' is cited.[1] John Strype in 1720 mentions 'Robin Hood Court, very ordinary, and ill built' (see Allusions below), between Church Lane and New Round Court, on the north side of the Strand. This would have been at or very near the present 437 Strand. Since the names of Robin Hood Courts and Alleys in London tended to be inspired by the presence of a public house named after the outlaw, in particular its often large and conspicuous inn sign, it is very likely there once was a Robin Hood pub in Robin Hood Court.

A New Review of London (1728) lists the locality as 'Robin hood's court against york-buildings',[2] the latter being a name 'once used generically for all the premises on the site of York House'.[3] After this time Robin Hood Court seems to have vanished, for it is not included in any of the later directories I have seen or on John Rocque's 1746 map (see detail below and see Maps section).

I shall next walk into the Strand, and view the Alleys and Courts therein: And first begin with those on the North Side, and next pass to Burleigh-street, as far as St. Martin's Lane; then to those on the South Side, beginning at Salisbury Buildings. And according to this Method, the first is,

Marygold Alley, a pretty large Place, but indifferent as to Buildings and Inhabitants. It hath a Passage up Steps into another Place of an ordinary Building, also so called; and thence it hath a Passage into Bennet's Court, which hath but a narrow Entry into the Strand; but after a little Way up Steps it hath pretty good Buildings. Denmark Court already spoken of. Curle Court hath a pretty good Row of Building on the East Side, which hath the Prospect of Bedford House and Yard, and at the upper End is a good House, much better than the rest. Then beyond Bedford House, unto Half-Moon-street, are these Places; Oliver's Alley, which is but small and ordinary; Lumley Court, indifferent good; Globe Alley, but ordinary Buildings; Bull Inn Court, a good large Place, better built then inhabited, hath a Passage with a Freestone Pavement into Maiden Lane. Blue Ball Court, of no great Account. Baylies Alley, very narrow, with a Passage into Maiden Lane. Heathcock Court hath pretty handsome Buildings. The Thatch'd Alley, but narrow, and not over good, hath a Passage into Maiden lane. Exchange Court hath indifferent good Buildings, with a Free-stone Pavement.

Half Moon Street, against the New Exchange, runneth up into Bedford-Street in Covent Garden; and here the Passage is but narrow, and very troublesome for Coaches to pass. All this Street, except some few Houses near Shandois-street and Maiden Lane, is in this Parish; and the Street is well inhabited by Tradesmen, except in the narrow Passage next the Strand. Then beyond this Street, unto St. Martin's Lane, are these Places: Harvey Court, a pretty handsome open Place, with good Buildings. Long Court or Alley, hath a narrow Passage through Entries into Shandois-street. Round Court, after a narrow Passage through an Entry out of the Strand, openeth into a pretty square Court; and from that into another Place, which leadeth into another Entry, and so into Shandois-street. This Place is of considerable Note, and much resorted unto, as being inhabited by Silk-men, Mercers, and Lace-men, who drive a considerable Trade, occasioned from the Opinion that the Females have, that they there buy better Pennyworths than elsewhere. Out of this Court there is lately made a Passage into New Round Court, designed for Shop-keepers as the other; but whether it will take, Time must shew: This Court is more open, and the Buildings far better than the other, and hath a better Passage into it out of the Strand, and therefore the more Prabability of its taking. Robin Hood Court, very ordinary, and ill built. Church Lane, very ordinary, which runneth up into Thackham's Court, a pretty handsome square Place, with a Freestone Pavement; which Court hath two Passages into a Street called, The Backside of Round Court, which falleth into Shandois-street, near St. Martin's Lane. This Place hath a Passage into Moors Yard, which leadeth into St Martin's Lane; also another Passage into New Round Court, and another turning Passage to St. Martin's Church, all but indifferently built or inhabited. Hewit's Court, a pretty good Court, with a Freestone Pavement into Church Lane. St. Martin's Court, a new built Court, with good Houses, and a Freestone Pavement, into Church Lane, near the Church. King's Head Inn, and Star Inn, both Places well resorted unto. Then a little beyond St. Martin's Lane, is the Checker Inn and Court, already spoken of; and almost against the Statue of the King on Horseback in Charing-Cross, is a pretty Court called Woodstock Court.[4]