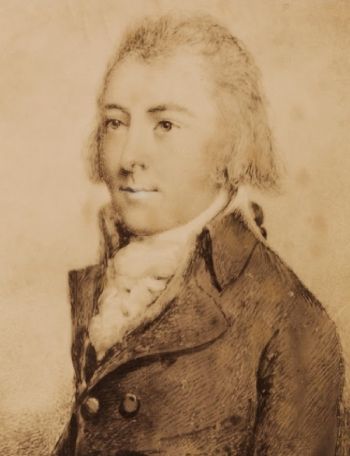 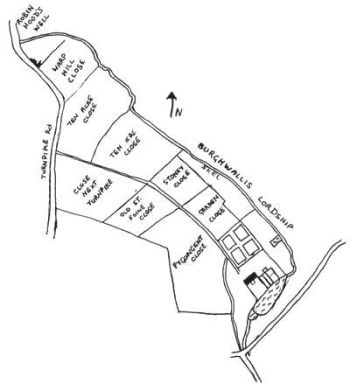 Skellow Grange, based on map drawn by Joseph Colbeck in 1763. The Turnpike Road is now the A1, though with a slightly altered course here. The road in the southeast is Grange Lane / © Margaret L. Pidcock-Burns 1995.

Robin Hood Close is listed in the 1840 tithe award for Skellow, one of the southernmost townships in Barnsdale. The owner and occupier was Godfrey Higgins, Esq. Its area was 6 acres, 2 roods, and 22 perches (roughly 26.561m2, equivalent to an area of approximately 163 x 163 m.)[1] Unfortunately we do not know its exact location. We can say, however, that this was somewhere north of Green Lane/Grange Lane. Being in Skellow, it would have been located a little east of the present A1 and probably west of Scorcher Lane (see map). At the northern tip of this area is Robin Hood's Well, around which a hamlet of the same name existed until about the middle of the nineteenth century.

If not certainly born, then at least baptized and bred in neighbouring Owston, Godfrey Higgins, Esq. (1773-1833), Cambridge scholar, social reformer, writer on Atlantis, druidism and other ancient religions, was the owner of Skellow Grange and some adjacent lands also lying in the northern part of the township of Skellow. It is not inconceivable that this progressive and socially-minded scholar, who reformed the lunatic asylum system in Yorkshire and spoke up against the Corn Laws, would have liked the idea of having part of his land named after Robin Hood. He may conceivably have begun referring to one of his enclosed fields as "Robin Hood Close". On the other hand, "Robin Hood Close" may also have been an older or even ancient field-name that just happens not to have been recorded before 1840. We have no evidence one way or the other.

Several years after Higgins died, the tithe commissioners inaugurated the process that would lead to the conversion of theoretically in-kind tithe payments of inhabitants of Skellow into cash payments. The son of the druidist reformer was now the local squire. He was also named Godfrey Higgins (1801-1863) and – like his father before him for aught I know – he owned not only Skellow Grange with surroundings, but also the rights to the tithes accruing from those lands. It makes no sense, of course, that landowners should pay tithes to themselves, and so as part of their work the tithe commissions "merged", i.e. effectively abolished, such tithes. Usually all tithes, both those that in fact had to be paid and the 'fictive' ones that some landowners were liable to pay themselves, were listed in schedules with information on names of owners, occupiers, and plots as well as acreages. Only the 'real' tithes could give rise to disputes. To facilitate a fair assessment and conversion a map of these areas was usually produced. Some such maps are very good, most are not. The one that Mr William Simpson produced for Skellow probably falls somewhere in between. His task certainly was made easier by the fact that all the areas for which Godfrey Higgins, Esq., was liable to pay himself tithes could be left blank on the map, for here there was no potential for disputes. Unfortunately for us this means that Robin Hood Close is not indicated on the tithe map for Skellow.

If we cannot say exactly where Robin Hood Close was located, at least we can make a reasonable guess. Based on the blank areas on the tithe map of Skellow, Joseph Colbeck's 1763 map of Skellow Grange (shown on this page), the known limits of neighbouring townships and the names and descriptions of Higgins's lands in the schedule, I think most of his lands in this neighbourhood lay within the area defined roughly by the A1 to the west, Green Lane to the south, Grange Lane to the southeast, and Scorcher Hills Lane to the east, northeast and north (see the second Google map on this page). Measured north-south along the A1 this area is just 1.1 km, in the south extending about 750 m east, mid-way along the north-south axis extending about 1.4 km east, and in the north extending c. 40 m east. The schedule of Higgins's lands begins with a group of plots close to the residence or situated along the Turnpike Road, whose course lay close to that of the present A1. Robin Hood Close appears towards the end of the list just before the New Inn Orchard-[2] The latter was presumably located in the hamlet of Robin Hood's Well. Immediately SE of the hamlet was a limestone quarry which is indicated on the 1854 6" O.S. map as "Old Quarry".[3] This was owned by Higgins and appears on the list of his lands as "Quarry at Robin Hood's Well".[4] It seems likely, but is by no means certain, that Robin Hood Close was located somewhere in the immediate vicinity. The coordinates entered in the infobox and indicated on the Google Map reflect this tentative conclusion.

I do not believe this place-name has been noticed in previous studies.

The locality is not indicated on any of these maps of the area. The below map views are all more or less centered on Robin Hood's Well, near which I believe the Close was located.