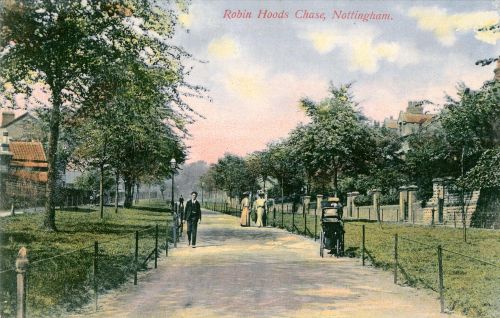 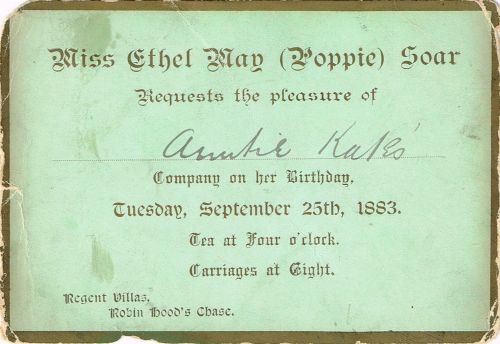 Robin Hood Chase, formerly known as 'Robin Hood's Chase', is a path, formerly a street, in Nottingham connecting Woodborough Road in the north-west and St Anne's Well Road in the south-east. The earliest record of the street name known to IRHB dates from 1883.

Until recently the earliest cartographical source on record at IRHB for this place-name was a 6" O.S. map of Nottingham published in 1885 and surveyed in 1880-81.[1] Since last-minute revisions to maps are at least a theoretical possibility, IRHB always follows the practice of dating maps by their date of publication rather than that of the survey on which they are based. Stuart Timms has kindly supplied IRHB with printed evidence of Robin Hood Chase being in existence, being known as 'Robin Hood's Chase' and, as it were, being lived in a couple of years earlier.[2] On a card printed in gold, Miss Ethel May, Stuart's great aunt 'Poppie', 'Requests the pleasure of Auntie Kate's Company on her Birthday, Tuesday, September 25th, 1883. Tea at Four o'clock. Carriages at eight. Regent Villas, Robin Hood's Chase'. The card is reproduced below. We can be sure that it was not Poppie herself who filled in the pre-printed card with the recipient's name, for the occasion was her second birthday.

For a short while this was the earliest occurrence of the street name 'Robin Hood Chase' known to IRHB, but a slightly earlier map source was found when the 25" O.S. maps of the area were checked as part of the update of this page. It turns out that Robin Hood Chase is already included (and named) on a map published in 1881 and based on a survey carried out that year.[3] Still, the invitation to Poppie's birthday remains the earliest non-cartographical evidence and it is of value also for what it tells us about the status of the street at the time. At least one prominent family lived there. Stuart Timms tells us that Poppie's grandfather, John Burton, was elected Mayor of Nottingham in 1884. Over time, it seems, the area became less fashionable, and recently it was felt that 'Robin Hood Chase off St Ann’s Well Road had seen a steady decline with under-occupied shops and maisonettes', so that the Nottingham City Council decided that redevelopment was required. This was completed by April of 2016.[4]