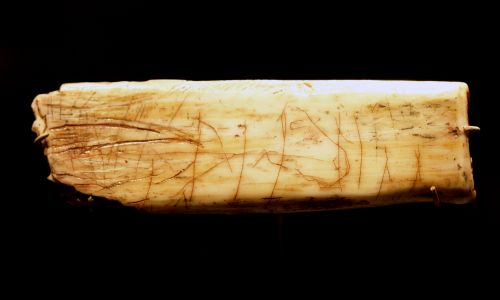 Robin Hood Cave Horse: an engraving of a horse's head on a fragment of rib / Creative Commons, via Wikipedia.

The Robin Hood Cave Horse is an engraving of a horse's head on a 73 mm long fragment of rib bone which was discovered in 1876 in the western chamber of Robin Hood's Cave in Creswell Crags, Derbyshire.

The most important discovery of the handiwork of man is the head and fore quarters of a horse [...] incised on a smoothed and rounded fragment of rib, cut short off at one end and broken at the other. On the flat side the head is represented with the nostrils and mouth and neck carefully drawn. A series of fine oblique lines show that the animal was hog-maned. They stop at the bend of the back, which is very correctly drawn. Indeed the whole is very well done and is evidently a sketch from the life. As is usually the case, the feet are not represented.
On comparing this engraving with those of horses from the caves of Perigord and from the recently described cave of the Kesslerloch, near Thayingen, in Switzerland, the identity of style renders the conclusion tolerably certain that the palaeolithic hunters who occupied the Creswell cave during the accumulation of the upper part of the cave-earth were the same as those who hunted the Reindeer and Horse in Switzerland and the south of France.[1]

Estimated to be from 12,500 to 13,000 years old, the engraving on the rib is in a style similar to that of cave drawings found at Late Magdalenian sites in France, where horses are the most popular subject, though only relatively few of the animal bones found at those sites are from horses. Now generally known as the Robin Hood Cave Horse, the artifact was formerly referred to as the Ochre Horse.[2] See furtehr the pages on Robin Hood's Pantry (Creswell Crags) and Creswell Crags place-name cluster.