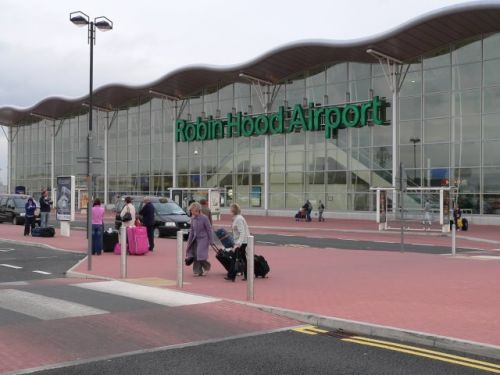 Robin Hood Airport, or to use its full name, Robin Hood Airport Doncaster Sheffield, is an international airport located at the former RAF Finningley station at Finningley, Doncaster. By the time it opened as a commercial airport in 2005, more than 11,000 people had signed a petition against the name Robin Hood Airport.[1] As is often the case with petitions, this one had no effect, and indeed if a million Brummies seem to contemplate with relative equanimity the possibility of their final joruneys ending at the Robin Hood Cemetery in Solihull – perhaps after a brief stop-over at the adjacent Robin Hood Crematorium – surely a good ten thousand Doncastrians can suffer the prospect of flying to sunnier climes via the Robin Hood safe in the knowledge that the return ticket will be valid.

According to a newspaper article dated 13 July 2022, the airport 'may no longer be commercially viable' and its owners are 'considering whether the site could be better used for something else'.[2]