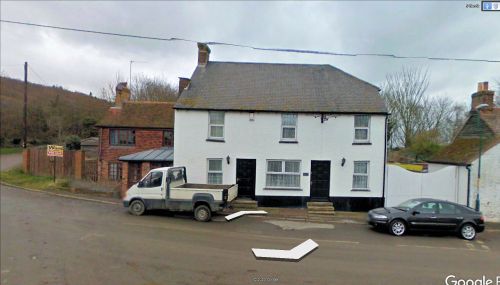 As noted at Pub History, the pub is listed under Halling in the 1881 and 1901 censuses.[1] It is entered in the 1881 census as "'Robin Hood' Beer house"[2] at 'Mills cottages[,] Crab's Corner'[3] and in that of 1901 as "'Robin Hood' Inn".[4] It is not clear from these census records that Crab's Corner and Mill's Cottages were situated in Upper Halling, but this was certainly the case. Thus for instance the 36 year old Walter Crowhurst, general labourer, who figures at 1 Mills Cottages in the 1881 census,[5] is listed in that of 1851 as a six year old 'scholar' with 'Upper Halling' cited in lieu of a street address. We also note that several persons in Upper halling are listed in 1851 with the same surname as the publican in 1901: Parris.[6]

The 1840 tithe schedule for Halling lists the easternmost of the plots on the north side of what is now The Street, in Upper Halling, as a 'Beer Shop[,] Shed and Garden', the land owned by Maximillian Dudley Digges Dalison, Esq., and occupied by a William Holding. In 1877, the owner was the same but the occupier an Edward Norman, while in 1884 it was owned by Hilton, Anderson & Company and occupied by Lingham and Davis. Its area was 1 rood and 15 perches (1391.11 m2).[7] This must be the Robin Hood. The immediate vicinity, where several streets meet, would then have been known as Crabb's Corner.

An indication that the pub was still in existence c. 1960 was given by the seller from whom IRHB bought the black and white postcard shown in the image gallery below. The card itself includes no printed text of any kind, but it was sold as a postcard depicting the 'Robin Hood pub, Upper Halling, Rochester 1960'. The year in the postmark is hardly legible, but the stamp and the general look of the card would seem to support the dating.