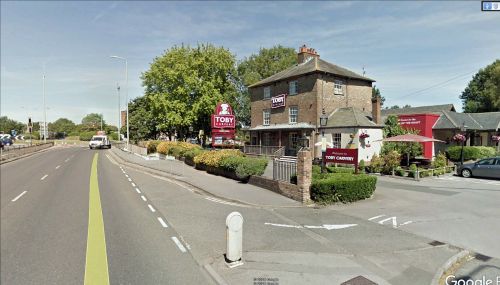 The Robin Hood lives on as a restaurant / Google Earth Street View.

The Robin Hood on London Road in Newbury, first recorded in 1796, is still in business, now as a Toby Carvery, but still with 'Robin Hood' as part of its name.

The excellent Pub History site, which provides a list of known publicans for the years 1796-1911, somewhat confusingly includes photos of two different buildings, referring to both as the Robin Hood in Newbury. One of them, which is clearly recognizable as the present Robin Hood, is included with another pub on a photo that must have been taken in 1966 when its neighbour the Robin Hood Roundabout was under construction. The other photo is accompanied by the legend 'Robin Hood, Newbury, before moving to Myrtles'.[1] According to the Lost Pubs Project, the latter Robin Hood 'situated on London Road [...] was converted to a private house following closure and has now been demolished'.[2] From what one can see of the pub sign in the photo of this now defunct pub it does not seem to depict Robin Hood. Unless the Robin Hood had two consecutive addresses, both on London Road, and in both cases in old buildings, there must be some mistake. This there also must be when another site, discussing the Robin Hood Roundabout, notes that to make room for it '[m]any buildings were demolished to create the new roundabout, and a new pub called Robin Hood was built'.[3] As noted above, the Robin Hood pub existed long before the roundabout was constructed. No doubt its name inspired that of the gyratory.

Maps of the area.