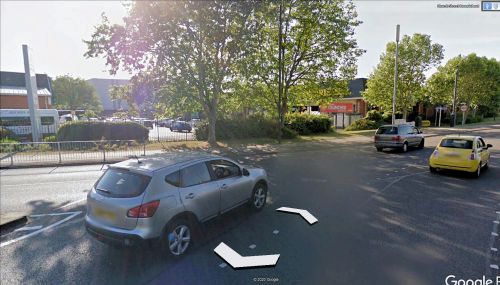 The Robin Hood stood where the Morrisons now is / Google Earth Street View.

The Robin Hood on Commercial Road in Landport, Portsmouth, existed by 1862 and closed in 1956.

Information on publicans etc. for the years 1881-1927 can be found at Pub History. See further below. The 1881 census has the pub at 361 Commercial Road,[1] but slightly later references put it at No. 371 of that road. The most likely explanation for the change would seem to be that the street was renumbered. There seems to have been a good deal of building activity, and certainly several changes to the roadnet, in this area between Commercial Road and the harbour during the period in question.

IRHB is fairly confident that the pub was located on the west side of the stretch of the then Commercial Road which is now named Mile End Road. It would likely have been on or near the parking lot at Morrisons, just west or perhaps somewhat southwest of the Church Street Roundabout. The census-taker who covered the area in question visited the Robin Hood (361 Commercial Road) as the very first place. Later he came to the 'Mile End Tavern' at 317 Commercial Road. The name 'Mile End' survives, as noted, in the name of this stretch of the then Commercial Road, and the 25" O.S. map of the area published in 1898 (see georeferenced map listed below) also includes the name 'Mile End Places' for a street we can more or less identify with the present Wingfield Street, on the east side of Mile End/Commercial Road. The households on Commercial Road visited by the census-taker all had odd numbers and must all have been on the west side of the road, for very helpfully the next census form tells us that it covers '[p]art of the Parish of Portsea bounded on the North by the South side of Kettering Terrace[,] on the south by the south side of Pitt Street[,] on the East by [...] Commercial Road, on the West by the Harbour',[2] and the census-taker here begins at Pitt Street and then moves north along Commercial Road, beginning at No. 363, which must thus have been located not far north of the Robin Hood. Pit Street no longer exists, but comparing the early maps with Google Earth we see that the back walls of the houses on its south side would have followed the south perimeter of the Morrisons supermarket, where its main entrances are.

The 25" map of the area published in 1933 has a 'P.H.' on the south corner of Commercial Road and Pitt Street (see Maps section below). This may have been the Robin Hood.

Shortly after the above was written, I came across a cache of information on Portsmouth pubs assembled by Stephen Pomeroy, which indeed lists the pub as situated on the corner of Commercial Road and Pitt Street. It also adds considerably to the information available at Pub History:[3]