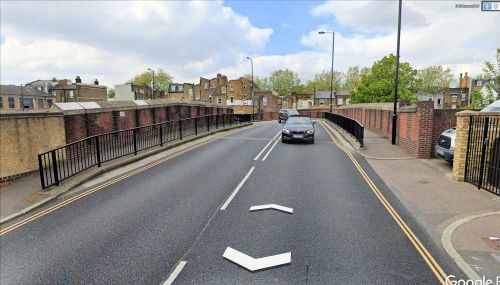 The Robin Hood would have been somehwere near here, on the east side of the railway tracks / Google Earth Street View.

According to two major web sites on London Pubs there was a Robin Hood pub at 1 North Blomfield Street during the 1850s. However, it has not yet been possible to confirm this.

Pub Wiki and London Pubology both list the 'Robin Hood', at 1 Blomfield Street North, Hackney, referring to an 1856 Post Office Directory and the censuses of 1851 and 1861. However, IRHB has found no records for Blomfield Street, Hackney, in the 1851 census, and in that for 1861, names, ages and occupations of residents do not match the data cited by the websites.[1] Unless the data we have seen is incomplete, there must be some misunderstanding, but until the 1856 Post Office Directory has been consulted, we must as it were, give this dead pub the benefit of doubt.