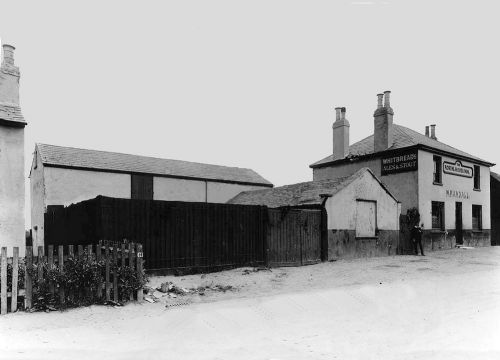 The Robin Hood, an inn or pub in Bennetts Castle Lane, Dagenham (formerly Essex, now Greater London), is first recorded in 1871.[1] It closed in 1929[2] or the early 1930s,[3] when the buildings or the plot were taken over by the People's Dispensary for Sick Animals, which in turn closed c. 1973.[4] Inbetween, the London City Mission may briefly have had part of its activities there before the London City Mission Hall (now Bethel Christian Centre) was built on the neighbouring plot, at the present 170 Bennetts Castle lane.[5] Administratively the area in which the pub was located was considered variously as belonging to Chadwell Heath and Ilford.[3] Bennetts Castle Lane is now in Dagenham as far as postal services are concerned. Information on publicans gleaned from trade directories etc. from the period 1871–1929 can be found at Pub History (see Sources below). Apparently the pub reopened at 807 Longbridge Road some time after its original premises were demolished.[6]