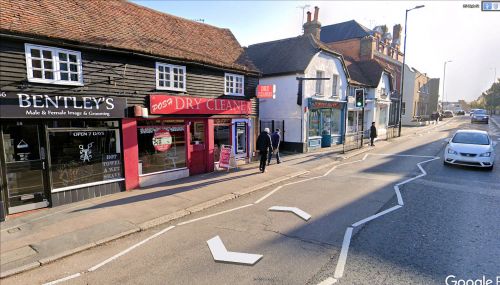 The Robin Hood may have been located somewhere around here / Google Earth Street View.

A public house named the Robin Hood was situated on 56 High Street, Bushey, Watford, Hertfordshire. It was in existence by 1891.

Census data on publicans and residents for the years 1891, 1901 and 1911 can be found at Pub History.[1] The still existing Red Lion, with the address 50 High Street, is located at the western corner of High Street and Rudolph Road. The present 56 High Street, a small hairdresser's at the eastern corner, occupies one half of a building which looks as if it may well have been in existence c. 1900. However, this does not seem likely to have been a public house. Perhaps the street was renumbered and 56 High Street was one of the houses slightly to the east of that now partly occupied by the hairdresser's?

The pub is not included on the maps.