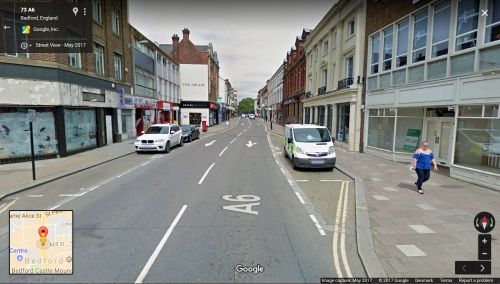 The Robin Hood on Bedford High Street was most likely the public house concerned in a list of ale-house cognizances from 1751. According to the calendar entry of this record, the list includes public houses in Bedford and elsewhere (in Bedfordshire). It is thus not certain that the reference is to the pub on Bedford High Street, but until evidence of another pub of the same name not too far from Bedford is found, this seems most likely. Almost exactly one hundred years later, Slater's directory listed what is probably the same pub, on Bedford High Street, the proprietor being a Charles Gaseley.[1] I am not aware when the pub closed, but this can hardly have been very recently, for there does not seem to be any references to this public house on the web. The pub is not named on any of the maps listed below, but public houses in urban areas very often are not. Even the 25" maps simply use the labels 'Inn' or 'P.H.' without a name.

1751
27th September. Ale-house Recognizances, giving the names of the various Inns in the Town of Bedford and elsewhere, viz.: — The Boat, the Wheatsheaf, the Chequer, the Blue Lion, the Dolphin, the Rose, the Sun, The Green Dragon, The Bakers Arms, the Sun in St. Pauls, the Castle, the Crown and Thistle, the Bachelors Arms, the Horse-shoe, the Bull, the Cock, the "Flower de Luce," the Duke of Cumberland's Head, The Saracen's Head, the Christopher, the Globe, the Golden Pot, the Cherry Tree, the Rose and Ch'own, Horse and Hound, The Crown, the Bell, the Ship, the Ragged Staff in St. Paul's, the Cross Keys, the Bell and Swan, the Checjuer in St. John's, the Saddle, the Angel in Cawdwell Street, the White Lion, the Red Lion, the Star, the George, the Crow, the Boat, the Bear, the Fox, the Royal Oak, the Nag's Head, the Black Swan, the White Hart, the Falcon, the Old Nags Head, the Blue Bell, the Spread Eagle, the Swan, the Currier's Arms, the White Hart, the King's Arms, the Sergeant's ? Head, the Maiden Head, the Rugged Staff, the Golden Lion, the Chequers in St. Mary's, the "Flower de Lis" in St. Paul's, the Unicorn, the White Horse, the Three Tuns, the Red Lion in St. Paul's, the Boy and Oar, and the Robin Hood.[2]