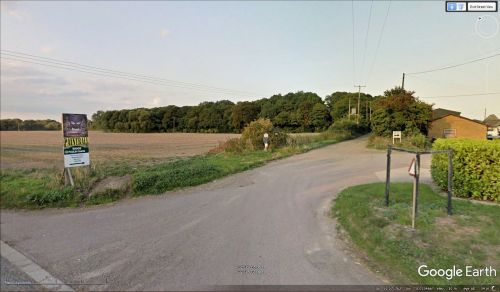 Robin Hood's Tree and the southernmost tollgate may well have stood in this area / Google Earth Street View.

According to local tradition, Robin Hood, standing on the mound on Limlow Hill just south of Litlington village, east of the road to Royston, shot an arrow that fell near the Old North Road, c. 2.5 km away near where the tollgate used to stand, at a spot formerly marked by an old thorn bush. I think the latter was identical with the Robin Hood's Tree mentioned in the 1811 Allusion cited below. According to the second Quotation below, the tollgate in the village of Kneesworth is first mentioned in 1714, and there was another tollgate c. 1 km south which has been suggested as an alternative location. A variant of the tradition has the arrow landing in Litlington Chalk Pit c. 700 metres W. of Limlow Hill. Robin Hood's prodigious shot is supposed to have been commemorated in the name of the Robin Hood & Little John inn in Litlington, which was established by 1811 and closed in 1910. It is hardly possible to say how much older than the former date this tradition may be.

According to the first of the Quotations below, the length of Robin Hood's shot was 1½ miles, c. 2.5 km. The O.S. grid reference cited in the second Quotation for the tollgate that was located in Kneesworth translates to 52.080702 -0.037189, which is almost 3.5 km from Limlow Hill, while the grid reference cited for the tollgate about 1 km further south, halfway between Kneesworth and Royston, translates to 52.071644 -0.033209, which is about 2.9 km from Limlow Hill. The latter thus matches the 1½ miles rather better, so I assume this was the tollgate in question. It is not possible to establish the location of Robin Hood's Tree with any reasonable degree of precision from the 1811 Allusion below, but I believe it is compatible with the assumption that the tree was identical with the "old thorn bush" that used to mark the spot, near the tollgate, where Robin Hood's arrow was believed to have landed.

Bassingbourn, including the Hamlet of Kneesworth.— North west, west, and south west of the village, is a strong, brown, clayey soil, of a good staple. North-east, east, and south-east of the village, is a brown, deep, loamy soil, lying upon a gravel; thence, in the same direction, beyond the line of Robin Hood's Tree, and extending towards Royston and Litlington, a thin, dry, white soil, upon a chalk or hurrock. The enclosed pastures are an open, brown, gravelly soil, of a good staple. [1]

The "Limbury" Tumulus, near Litlington, Cambs. — On a hill to the south of the village of Litlington, Cambs.[,] there used to be a large tumulus called Limbury or Linloe Hill. A local tradition related that from it Robin Hood shot an arrow which fell on the Ermine Street, near where the toll gate used to stand, about a mile and a half away, a spot now marked by an ancient hawthorn bush, and on the Ordnance map as "Robin Hood." Having often seen this tumulus when travelling along the railway, I paid a visit to it about two years ago, and on arriving at the top of the hill was surprised to find that the tumulus had vanished, but in place of it about half an acre of the adjoining arable land was covered with chalk, bones, and broken pottery, evidently Roman. Amongst the bones I found a remarkable perfect epiphysis from the lower end of the femur of a deer. Coins of the reigns of Vespasian and Claudius have been found here, and about half a mile south near Ashwell Street, a Roman cemetery was discovered in 1821. Is an occupier, or owner of land, allowed to destroy ancient landmarks like this with impunity?[2]

[Palmer] [...] says that the arrow "fell on the Ermine Street, near where the tollgate used to stand, about a mile and a half away, a spot now marked by an ancient hawthorn bush". This tollgate used to be on the Old North Road (the modern A1198) in the parish of Kneesworth; but it could refer either to the tollgate once at TL346443, in place by 1714, or to the 19th century one further south at about TL349433.[3]