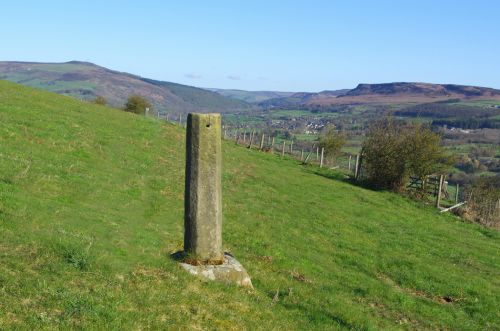 Robin Hood's Stoop on Offerton Moor is an old boundary stone which was perhaps originally part of a medieval wayside cross. According to later tradition, Robin Hood shot an arrow from the Stoop all the way to Hathersage Churchyard, about 2 km to the NE.[1] Similar traditions relate to Whitby Abbey (North Riding of Yorkshire) and Limlow Hill (Cambridgeshire) among others. The earliest source for this place-name found so far is the 25" O.S. map of the area published in 1880, but it seems likely it was included on earlier maps.

In view of Hathersage's centuries old romance with Little John it is not as surprising as it might otherwise have seemed that Robin Hood's Stoop has an alternative name that connects it with Robin Hood's next in command. The second item in the image gallery below shows an early postcard with a view of "Hathersage From Little John's Flight, Highlow". There is no doubt that the stone seen to the left in the foreground is in fact Robin Hood's Stoop. In the third photo in the gallery, Google gives us a nice view of Hathersage from the unnamed road[2] below the Stoop. A close look tells us it is essentially the same scene as that on the postcard. This becomes still clearer in the next photo from the Google photo car where its camera is pointed a little downwards. As can be seen in the next photo, the Stoop stands not far from the road. In the sixth photo we see the slope from which the postcard photographer took his excellent photo. He was standing somewhat higher up and to the left of the Stoop. During the five years between the first photo (2012) and the Google mobile's visit (2017) a protective wire fence was erected around the old boundary stone, but there is no doubt "Little John's Flight" is Robin Hood's Stoop. I do not believe this alternative name was common.