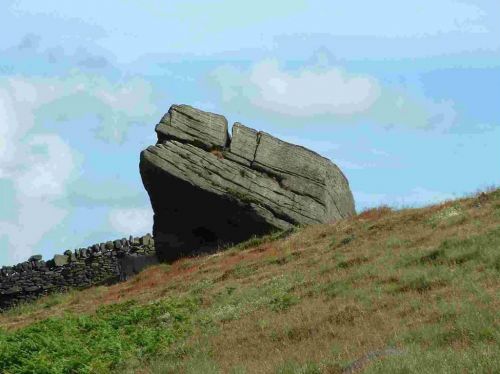 Robin Hood's Stone is a large rock situated on the hillside just east of Holden Lane about halfway between West Norton and Silsden. According to local legend the stone was named after the outlaw because he hid beneath the rock when pursued. Just 300 m to the NE lies Robin Hood Wood, now reduced to two small stands of trees. Robin Hood's Stone apparently also has been known as Robin Hood's Chair and Robin Hood's Seat (see 1891 allusions cited below).

According to an official publication of the City of Bradford Metropolitan District Council (2014), the contractors had to remove this stone as it was in the way when the Barden to Bradford aqueduct was built c. 1858. The rock was split, but in response to a public outcry from locals a large section of the stone was moved to its present position.[1] Paul Bennett, at the Northern Antiquary website[2] considers it a "modern piece of industrial folklore [...] that this stone was actually put here by workers in the Victorian times" and that the "boulder allegedly lived near Barden, Bolton Abbey, but was blocking construction work, so was uprooted and moved all the way to where it now sits". Instead of being occasioned by the splitting of the rock, he believes the outcry occurred because "plans were afoot to use the rock for building material, but local people objected and so the stone kept its position overlooking the valley". As is clear from the entry on the aqueduct at the British Listed Buildings site,[3] the aqueduct is in fact a good deal closer than Bolton Abbey to Robin Hood's Stone. Measured as the crow flies, the abbey is c. 9 km away, while the aqueduct is just 2.2 km away (coordinates: 53.9153, -1.9184). However, Bennett is certainly right in considering the story of the stone's having been moved a modern fabrication. More doubtful is his suggestion that a number of cup-like, clearly man-made indentations in the upper surface of the rock were made as foot-holes by climbers, for this is hard to believe since the rock is not much taller than a man. Perhaps the "cups" are ancient?

First record of the name

According to the City of Bradford Metropolitan District Council,[4] "in reality the rock was found by contractors who were building the Barden to Bradford Aqueduct in the late 1850's", while Bennett notes that "records of this stone only go back — as far as I’ve found — to 1850". However, A. H. Smith in the standard work on West Riding place-names cites, under Silsden and as his only source, an 1846 tithe award.[5] Clearly therefore Robin Hood's Stone was not excavated during the construction of the aqueduct around 1858. It was already visible, and named after the outlaw, in 1846. Surveying for the earliest of the 6" O.S. maps listed below was done in 1848. Robin Hood's Stone is on that map.

Picnic at the rock

During the first ten years after World War II, the rock became a popular picnic spot for the inhabitants of Keighley and Silsden. More recently the area has been fenced in, but one has a good view of the rock from Holden Lane.[6] Despite the absence of any evidence antedating the mid-19th century and without citing any supportive archaeological evidence, Bennett[7] states as fact that "[i]n bygone times the rock was a local meeting place" and speculates that this would have been "perhaps around Beltane, in line with Robin Hood festivities."

Dobson & Taylor for this locality provide the queried O.S. grid reference SE:045465. This converts as 53.914630,-1.932978, which is c. 1 km W of Barden Aqueduct but c. 2.6 km NNW of the actual location of Robin Hood's Stone. This grid reference is incorrect (unless the conversion to modern coordinates went wrong).

The City of Bradford Metropolitan District Council publication[8] referred to above is a PDF leaflet detailing a walking route in the area. It provides good directions to the rock and has an excellent map.

Steeton to Ilkley, 7½ m., or Addingham, 7 m. by Holden Gill. This is a charming 'round about' trip. The visitor from Silsden may go through Brunthwaite and up the road direct under Crag Wood Quarry to Gill Grange 2 m[iles]. From Steeton directly after the Aire bridge is crossed go over a narrow stone bridge across Silsden beck and through the fields in the direction of Holden Wood. When the lane is entered at Holden Ho[use]., turn l[eft]., a short ¼ m[ile]. and enter a stile on r[ight]. where path leads up to the canal, which here goes over the Holden beck on a single arch. This is a pleasant spot, and a favourite one with naturalists. Turn r[ight]. and cross the canal bridge up to the Park farms, where teas and refreshments may be had. From these houses the road may be ascended to the top of the open moor at Robin Hood's Chair, near Holden Gate, or at its divergence r[ight]. there is a private gate-way into Holden Wood [...][9]

Kildwick to Elslack, 6 m[iles]. For sweet air and good views this is a capital outing over Glusburn Moor (800 ft.) Leaving the station on the south side by a short field path on r[ight]. ascend the moor, having Mr. Petty's turreted mansion hanging above Airedale on r[ight]. with Robin Hood's Seat and Flasby Fell away in the distance. Descend past Upper Leys farm to the four-lane ends, where just above the plantation is a large artificial earthwork in the form of a circular camp. It is probably Danish. Keep straight up Baby Ho[use]. lane over Carlton moor by a narrow band of mountain limestone, which ascends to Park Head quarry, where glacial drift is seen resting upon the limestone at an altitude of 1050 ft. The road passes the quarry to a second four-lane ends. Here there is an old dated (1730) milestone: to Skipton 4 m[iles]., to Colne 8 m[iles]., &c., and the prospect from the (Elslack) moorland eminence just above is one of immense variety and extent, including Pendle, Boulsworth. Embsay Crag, Rylstone Fell, due N. the cones of Flasby, and beyond them the flat top of Ingleboro.[10]