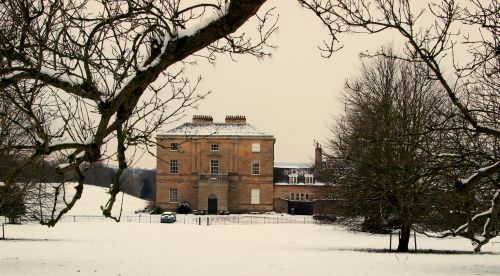 A view of Papplewick Hall from the B836, Blidworth Waye (sic). It was built between 1781-87 for the Hon. Frederick Montagu. The architect is thought to have been William Lindley of Doncaster. It is now divided into privately owned apartments / David Hallam-Jones, Creative Commons, via Geograph.

Robin Hood's Stable is a cave cut into sandstone, located c. 150 m NNE of Papplewick Hall. Neither Dobson & Taylor nor the English Place-Name Society's volume on Nottingham provide any references. The earliest source I have found so far is John Throsby's interesting description with its accompanying illustrations (see Allusions section below). The 'stable' is included on the 6" O.S. map of the area published in 1884 (see Maps section below)[1]

The Thoroton referred to in the 1790 allusion is Robert Thoroton, whose Antiquities of Nottinghamshire (1677) was expanded almost beyond recognition by John Throsby in 1790 (see Sources and Background sections below).

These places are not distinctly relate by Thoroton. In what may be denominated the former is the domain of the honourable Frederick Montague. The village here is pleasantly situated, near the delightful pleasure grounds of that gentleman. Here are extensive cotton-mills which employ many hands.
In this lordship is a hollow rock called Robin Hood's Stable, handed down, as such by tradition; it is a curious Cave on the side of a little hill, on a farm, om Mr. Montague's, near the Lodge at Papplewick-Hall. Hayman Rook, Esq. who favoured me with the drawings of the entrance and internal appearances of this Cave, from which the views below are taken, thinks there is a great probability of its being used by that celebrated depredator.
No. 1, is a perspective view of the entrance before the present door was put up and the wall erected.
No. 2, is a view of the inside. This Cave evidently appears to have been cut out of the solid rock, which seems to have been excavated with judgement; the little hollows (a) (b) (c), are well contrived for holding fodder; at (a) two horses may feed together; at (b) and (c) one each.[2]