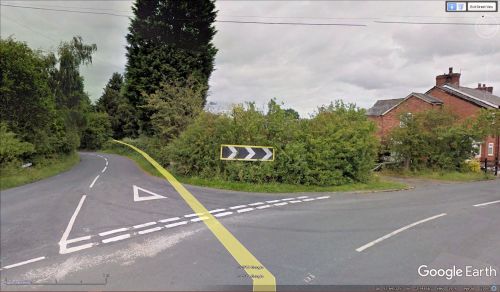 A cross that was probably known locally as Robin Hood's Cross formerly stood on the eastern side of the junction of Syd Brook and Blue Stone lanes in Mawdesley.

Henry Taylor noted in 1899 that "[t]he pedestal of this cross only remains", and this had "recently been moved from one corner of the road to the other, to be more out of the way of carts". The cross had "been broken off short in the socket, leaving no cavity for holy water".[1] In some of the O.S. maps listed below it is not clear if the site of the cross is meant to be on the western or eastern side of the road, on others it is clearly on the eastern side (see Maps below). In the absence of any good evidence to the contrary we must therefore opt for the north-eastern side of the junction as the original site. This probably means that by 1899 the remains of the cross had been moved to the north-western side of the junction. It was noted in 1957 that "[n]o trace of this cross remains. Local enquiries revealed no knowledge of its existence".[2]

Dobson & Taylor query whether the cross is "possibly associated with the hamlet of Robin Hood less than two miles away".[3] For the latter see Robin Hood (Appley Bridge). Apart from their being both named after Robin Hood, it was probably simply the relatively short distance between the two that prompted this suggestion. I have found nothing else to connect them, and I suspect Dobson & Taylor would rather have connected the cross with the other localities named after Robin Hood in Mawdesley, had they known about them.

In fact it is not even entirely certain that the cross was connected with Robin Hood locally. Dobson & Taylor refer to a brief notice in the Victoria County History which in turn refers to Henry Taylor's entry on the cross in his 1899 paper.[4] Taylor cites no source, but the details he provides make it likely that he had visited the site. We know from his entry on Robin Hood Well, just c. 65 m SSW of the site of the cross, that he consulted early O.S. maps, including one he dates 1848.[5] The 6" map published in 1847 – I have not found one published in 1848 – includes both the site of the cross and Robin Hood's Inn. They are labelled, respectively, "Pedestal of Stone Cross" and "Robin Hood", with the words "Stone Cross" in black letter, in early O.S. usage effectively the equivalent of "Site of Stone Cross". However, the labels of these adjacent points of interest are printed one above the other: "Pedestal of Stone Cross | Robin Hood", thus potentially giving the impression that both labels refer to one point of interest. Later O.S. maps tend to avoid this ambiguous arrangement of the labels. The cross is in fact not labelled "Robin Hood's Cross" on any of the maps listed below, so unless independent evidence is found we cannot be entirely certain that the name "Robin Hood's Cross" is not the result of a misreading.