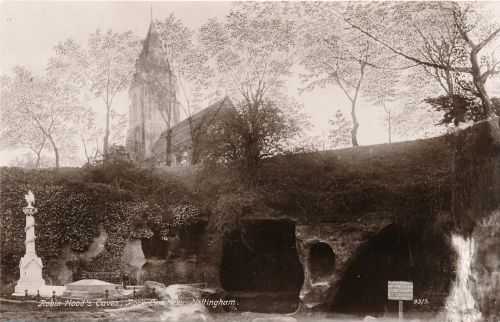 Robin Hood's Cave is located at the eastern perimeter of Rock Cemetery in Nottingham, immediately west of Mansfield Road (A60). In the mid-19th century, as the area was being cleared and excavated to establish the cemetery, local clergyman George Oliver – in this very much a child of his time – was convinced that several of the caves found there, including Robin Hood's Cave, were part of an ancient druid temple.[1] Reality has a habit of being prosaic. The caves were in fact a by-product of mining, during the 18th century and earlier, for sandstone which was ground to yield sand.[2] Until the cemetery was created, the area where Robin Hood's Cave is located was known as the Ropewalk as rope was made here (see Thomas Moore's painting reproduced below).

In 1892, when the sand mining was long forgotten, the cave and part of the cave system with which it is connected were advertised as "Robin Hood's Mammoth Cave", "one of the grandest sights in England".[3] At present I do not know if the cave had been connected with, or named after, Robin Hood before that date. It is noted in a recent article by a local historian that the cave "was once known as 'Robin Hood’s Cave or Stables'", and we may conclude, therefore, that the name is now defunct. I have not seen the cave referred to as Robin Hood' Stable elsewhere. As can be seen on the present page, the cave was a popular subject for photographic postcards at the turn of the 20th century.