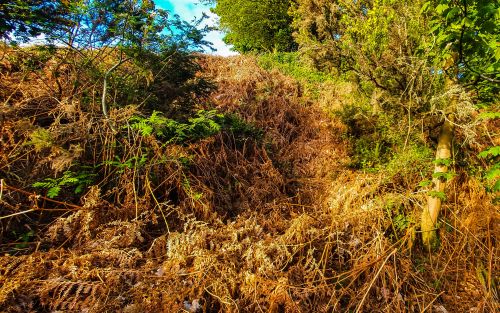 Robin Hood's Cave is here in the darkest area among the bracken. Cropped photo / Courtesy Rich. Also see photos in gallery below.

Now filled in and hidden to the casual passer-by, Robin Hood's Cave sits near a path immediately east of Derby Road, some 1.5 km SSE of central Kirkby in Ashfield. About 700 m NE of the site of the cave are found Robin Hood's Hills and Robin Hood's Chair, while the Robin Hood, a public house, could once be frequented about 600 m S of the Cave, just south of Annesley at what was then a crossroads but is now the corner of Derby Road and Forest Road. The earliest source for this place-name would seem to be an O.S. map from c. 1825.[1]

Thanks to the kindness of an IRHB visitor named Rich we now have several excellent photos of the cave and its surroundings. The cave is not easy to spot, but he found it on his second attempt. Here are his comments on each photo: