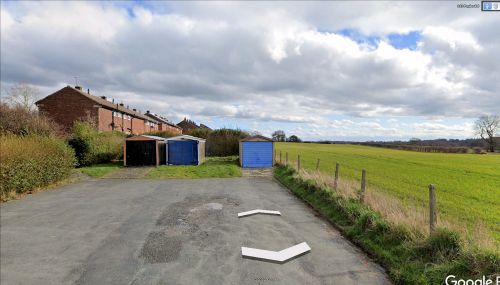 Looking east-southeast from Poplar Road. Part of the field extending towards the trees, centre distance, to the right of the rightmost garage was one of the Robin Hood's Butts / Google Earth Street View.

Two plots of land just south of Weaverham were known as Robin Hood's Butts in 1839.

This entry is concerned with the northernmost of the two butts, which figure in the 1839 tithe award for Weaverham. The butt had an area of 2 acres, 3 roods and 16 perches (11533.54 m2). The landowner is listed as William Colley Woodfine, the occupier was a Thomas Hope. The tithe award omits the ususally provided information about the state of cultivation of the plot.[1]

The name 'Robin Hood's Butts' is often applied to pairs of mounds or hillocks (see Places named Robin Hood's Butts), but the term 'butt' can also refer to a 'raised strip of cultivated land between two furrows, a ridge' or a 'small piece of land, esp. of an irregular shape; a paddock'.[2] It is not clear if the name was applied to mounds or hillocks within these plots or if it referred to the shapes of the plots. The southernmost of the two butts was situated south of the above field, its centrepoint being about 75 m south of that of its northern counterpart. One of the English Place-Name Society's volumes on Cheshire notes – presumably these – Robin Hoods Butts but mistakenly puts them in Cuddington,[3] a village situated about 2 km SSW of Weaverham. The two butts can be seen in the detail of the tithe map included in the image gallery below. The southernmost butt is No. 335, near the centre. Above it is No. 343, northwest of which is No. 328, northwest of which is No. 329, the northernmost Robin Hood's Butts. About 1.75 km north-northwest of the northernmost of these butts is the northernmost of another pair of former Robin Hood's Butts.