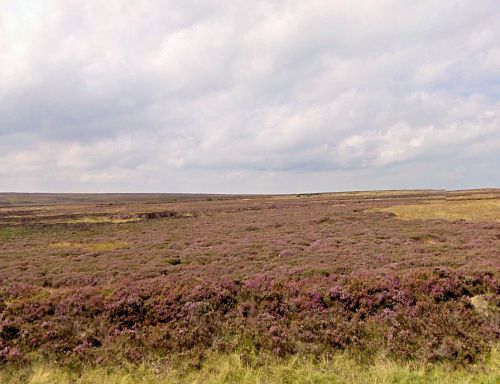 View towards what remains of Robin Hood's Butt from the road to Danby, which passes within a few meters of the site. Nothing definite can be seen from the road / Google Earth Street View.

Three or four ancient barrows on Gerrick Moor and Danby Low Moor in the North Yorkshire Moors area are (or have been) known collectively as Robin Hood's Butts. The third of these from the west is a heather covered Bronze Age round barrow, 14 m. in diameter and with a 0.7 m. high flat top with a diameter of 6 m.[1]

Dobson & Taylor, following previous writers, list the butts as "[t]hree tumuli on Danby Low Moor and others further north on Gerrick Moor towards Skelton".[2] English Heritage lists one of the tumuli as being in Danby, and this may well be correct, but it is located at most a couple of hundred meters east of the (other) Butts on Gerrick Moor, not south towards Danby.[3] I have found no concrete and specific references to other Robin Hood's Butts in the area near Danby than those on, or in the immediate vicinity of, Gerrick Moor. Probably these same butts have been variously described as being on Gerrick Moor and neighbouring Danby Low Moor. On Elm Ledge, just north of the village of Danby, are found the remains of a Neolithic and a Bronze Age barrow.[4] These could also have been known as Robin Hood's Butts, but so far I have found no indication of this.

The number of mounds included under the name "Robin Hood's Butts" in this vicinity may have decreased over time as mounds that were once clearly visible, perhaps even prominent, landscape features were razed to the ground by so-called antiquarians digging for "curious" artifacts or remains or by people in search of stones and gravel for use as building materials or in road construction. Canon Atkinson, an amateur archaeologist who discussed these mounds in two magazine articles (see section "Background" below), was a noted spoiler of ancient burial mounds.[5] So far I have found no earlier source for this place-name than the 6" O.S. map of the area published in 1856 (see Maps section below).

See the page on places named Robin Hood's Butts for a general discussion and list of such names.