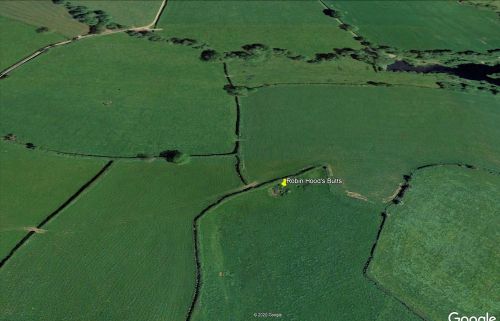 An alleged 'low' or barrow west of Lowfields, near Combridge, about 3 km north of Uttoxeter, was known as 'Robin Hood's Butts', apparently as early as 1658. According to an archaelogical field investigator who visited the site no later than 1957, the feature which was interpreted by an antiquary and a local historian as a prehistoric monument is 'obviously a fairly modern plantation ring'.[1] According to local tradition, Robin Hood shot an arrow there from some point in Stubwood, c. 2.5 km to the north-northeast.

Robert Plot in his Natural History of Stafford-shire (1686) notes what he takes for a Saxon burial mound 'in a place call'd Low-field about a quarter of a mile West from Combridg'.[2] In 1865, the local historian Francis Redfern notes that '[a] barrow still exists at Lowfields with trees growing upon it' (see Allusions below). He cites the name 'Robin Hood's Butts' and mentions a tradition to the effect that arrows shot by Robin Hood from some place in Stubwood (c. 2.5 km NNE) called White Gate had landed on the mound. According to a tradition current among local peasants, at one time a battle had been fought at Lowfields. Redfern concludes that the mound, which he notes was 'but slightly elevated above the surrounding surface', may have been part of a cemetery from that time. He gives a somewhat more elaborate account in the second edition of his local history of Uttoxeter, published 1886 (see Allusions below). The 'old survey of Uttoxeter parish' he cites in the latter as source for the name 'Robin Hood's Butts' should almost certainly be identified with Peter Lightfoot's 'Survey of Uttoxeter' (1658).[3]

The field investigator's report of c. 1957 finds 'no trace of a barrow or anything else of significance' and states that '[t]he circular bank and ditch described by Redfern is [sic] obviously a fairly modern plantation ring'.[4] IRHB has not been able to identify the 'White Gate' in Stubwood at which Robin Hood was said to have been standing when performing his feats of flight shooting.

A barrow still exists at Lowfields with trees growing upon it. It is called "Robin Hood's butts," and the place from whence he is said to have shot his arrows from the trusty bow, is placed at the White Gate on the Stubwood. This low is but slightly elevated above the surrounding surface. Fragments of swords are said to have been turned up near it, in the course of draining operations which have been carried on. There is a tradition current among the peasantry, that a battle was at one time fought at Low Fields, and the appearance of the low would lead one to the belief that it is a Saxon barrow, and may form part of a cemetery of that period.[5]

1886 - Redfern, Francis - History and Antiquities of Town of Uttoxeter (1)

[...] there is what has every evidence of being a Saxon cemetery in Uttoxeter parish at Low Fields, where it has hitherto been supposed there was only an ordinary tumulus. A slightly raised mound of this character, and of but small extent, certainly exists in the field just on the north-east side of the place hitherto supposed to be a low, but now the trees and impenetrable brushwood have been cleared away from the site conjectured to have been a barrow, it proves to be an extensive cemetery enclosed by a circular ditch and fence. Over the surface of the enclosure there are slightly raised earthern banks in the form of a cross, and which must indicate it to be a Saxon Christian burial ground. One of these remains has the name of Robin Hood's butts, and the land on which they exist is so denominated in an old survey of Uttoxeter parish. The position from which he is stated to have shot his arrows from his trusty bow, is placed at the White Gate at Stubwood. There is a prevalent tradition also, that a great battle has been fought at Low Fields in remote times, and [p. 87:] that the contest surged in that direction from Rocester, and it is said that fragments of swords have been dug up thereabouts.[6]