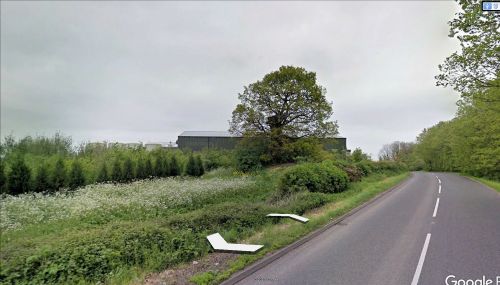 Elford Low, on which the large solitary tree stands, was known as 'Robin Hood's Butt' in the 19th century and earlier / Google Earth Street View

The mound now generally known as 'Elford Low', situated on the east side of Tamworth Road (A513), c. 800 m south-southeast of the village of Elford, had the alternative name of 'Robin Hood's Butt' according to local historians writing in the late 18th to mid-19th century. Another, now unidentifiable, mound situated three or four kilometres southwest of it was known under the same name. It was said, during the first half of the 19th century, that Robin Hood used to shoot arrows from one to the other. They were known collectively, therefore, as 'Robin Hood's Shooting Butts'.

Robin Hood's Butts in Elford and Wigginton were first noted by Stebbing Shaw in his History and Antiquities of Staffordshire (1798).[1] Other early local historians had no doubt that the 'butts' were Roman tumuli (see Allusions below). This may or may not have been the case; earthworks of more recent date were often misattributed to the Romans or Celts, and while the 'butt' situated southeast of Wigginton can no longer be identified, the other one, Elford Low, does not appear to be included at PastScape, which would seem to indicate that it is not currently considered archaeologically significant. However, according to William Pitt's Topographical History of Staffordshire (1817):[2]

Elford-low is situated on the top of a hill, a little beyond the paper-mill, in the corner of a fied, close to the Tamworth road, and is distinguished by an oak tree on its summit. Dr. Plott, from examination, proved it to be sepulchral. Mr. Pennant, from its elevation, conjectures that it might have had on it a specula or watch-tower; and Mr. Bourne, an intelligent farmer, who has a good house on the other side of the hill on his own estate, told Mr. Shaw that he saw the bones of three human skeletons dug out of a gravel-pit, a few years since, near this Low, which seems a conclusive proof that it is the site of some ancient cemetery.

Roman or not, it thus seems likely that Elford Low was a tumulus. C. F. Palmer (1845) felt that the tradition connecting the two mounds through Robin's shooting arrows from one to another was of fairly modern origin (see Allusions below). The early O.S. maps listed below all know the mound as 'Elford Low', not 'Robin Hood's Butt'.

Nor yet, in conclusion, should we neglect to point out those objects in the neighbourhood worthy of the notice of the antiquary. He too, who loves to dwell on scenes of former days, may visit, within the compass of a few miles, spots whose very names echo the voice of ages ﬂed, and bring remembrance of the past. Not far away still stand the mouldering ruins of the earliest convent in these parts, raised by the great monarch Ecgberht as a habitation for his daughter Editha, whom Modwen taught and Lyne and Osythe led. There are also other cloister shades, the walls now changed to a different use, once the recluses’ dwelling. The high mound still marks the battle field where Saxons fought, and the Mercian king was slain by an usurper, who himself, in his turn, was doomed to fall before the expiration of the year. The tombs where Romans sleep may partly yet be seen, known as the butts of Robin Hood, because, as tradition tells, he often there exercised his skill with his merry company. Many other objects of equal interest still remain around the town, to which we cannot particularly allude in this place.[3]

We must now turn our attention from the very general and enlarged view, in which we have been lately compelled to give the history of Tamworth, to subjects of more particular and limited interest. And this course of proceeding we adopt with the greater pleasure, as we enter into a ﬁeld freer from the dry details, which have demanded our chief consideration, since the period of the conquest. The ﬁrst point, which will occupy our regard, is one connected with tales and legends, heard with intense interest and gratification in the vernal days of childhood, and remembered with pleasure, when the winter of life has chilled the energy of youth, and hoary made the head. [p. 60:]

According to the common tradition of the locality, Tamworth and the surrounding neighbourhood were the frequent resort of the famous outlaw, Robin Hood. By the name of his butts, have ever been known the Roman tumuli at Wigginton and Elford. It has been suggested that they might have received this appellation, merely from their being the common archery grounds, where the people practised the noble art, once so highly prized in this kingdom. But, had it been usual for such places to be so named, every town and village would have boasted of its Robin Hood’s butts. There is not the least improbability in his visiting this place, as he so constantly haunted localities within about thirty miles distant. The extensive royal woods around this town would doubtless form a rich ﬁeld for his adventures. The tale, however, that he was able to shoot from one of these butts to the other seems to have been a modern addition, in order to account for their designation. It was in fact a total impossibility, as the distance is nearly two miles. The longest shot which Robin is recorded to have made, was when he was requested to exhibit his dexterity with the bow by Richard, abbot of Whitby, with whom he and his lieutenant, Little John, went to dine, most probably without waiting for the formality of a special invitation. From the top of the abbey, he and his companion let two arrows ﬂy, which fell, one on either side of a lane, not far from Whitby laths. The distance was about a mile and a quarter; and it must have been very considerably increased by the elevated situation which the shooters occupied, as the abbey stood on the summit of a cliff. This feat occurred in 1188. In memory of the transaction, the abbot caused [p. 61:] two pillars to be erected, where the arrows fell, on each of which was inscribed the name of the shooter.

We are, indeed, unwilling to lose the connection of Tamworth with the bold rover of the forests. He is the only malefactor, whose memory reﬂects no disgrace on those places, with which his name is associated. On the contrary, it has attached an almost sacred character to them; for the very crimes of the outlaw were rendered hallowed to succeeding generations. His constant opposition to the tyranny of the Norman lords and his principles of equality endeared him, in the strongest manner, to the Saxons, who formed the great mass of the population. For, according to the old historians, though an arch-robber, he was the gentlest thief that ever lived, and a man of unbounded charity. The opulent and noble he deprived of their wealth, to enrich the poor; and for the oppressed, he frequently obtained the redress, for which they vainly ought elsewhere. He was not destitute of the deep religious temper of those olden times, which inﬂuenced every action of life, and, however anomalous it might be thought, gave a peculiar tinge even to the commission of misdeeds themselves. The same source of all the reﬁned feelings, which characterize Christianity, gave him, in common with the rest, that generous and noble disposition towards the tenderer sex, so universal in the days of chivalry, whence it as descended to our times. For, according to the old ballad,

Robin loved our dere Lady;
For doute of dedely synne,
Wolds he never do company harm
That any woman was ynne.

[p. 62:] There has been much dispute respecting the title which Robin Hood is said to have possessed of earl of Huntingdon. His real name is conjectured to have been Robert Fitz-ooth; and the common-people, dropping the Norman Fitz, modiﬁed it into Hood. Robin might probably have been an alteration of Roving,–a title most appropriate to him, on account of the unsettled and wandering life which he led. All the ballads concerning him present the marks of changes in orthography, at different periods. If these opinions be correct, he most certainly was connected with the family of Simon de St. Liz, earl of Huntingdon. But in the old legends, he is often styled simply a yeoman. Thus one, entitled "a lytell geste of Robyn hode and his meyne, and of the proude sheryfe of Notyngham" begins

"Lithe and lysten, gentylmen,
That be of fre-bore blode:
I shall you tell of a good yeman,
His name was Robyn hode."

This circumstance has formed the foundation of one of the greatest objections, which has been urged against his having held the title. A little consideration, however, will remove the difficulty, in a very great measure. A yeoman he might have been; for he does not appear to have possessed any estates. It is probable that the family property was conﬁscated in his father’s time, in consequence of the rebellion of Robert de Ferrers against Henry II., in 1173. According to the collection, called "Robin Hood’s Garland," he was a native of Loxley, which belonged to the Ferrers’ family. He [p. 63:] could not have assumed the title until the death of John Scott, tenth and last earl of Huntingdon (also of Chester), in 1237. He was, at that time, an old man; and his deeds of renown were almost brought to a close. Hence the ballads relating to exploits which occurred previously to this time might rightly denominate him a yeoman.

But even supposing that Robin Hood were Fitz-ooth, his right to the earldom of Huntingdon was of a very dubious nature. It would rather descend with the sisters and coheiresses of John Scott, than pass to him. It is not improbable that he might have assumed the title whilst it lay dormant, or it was assigned to him by the people, rather than that he properly possessed it. In fact, without regarding any other point, he was incapable as an outlaw of holding it. But here we are entering so deeply into the wide region of conjecture, that we shall draw this part of our subject to a conclusion.

Bold Robin died when he must have attained an age of upwards of eighty years. The stone over his humble tomb, near the nunnery of Kirklees, in Yorkshire, still remains. It once bore this inscription, now effaced by time.[4]

Nothing relevant found in: