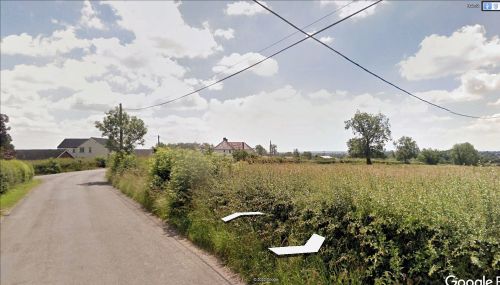 Hollington, west side of Hoargate Lane: A plot beyond the utility pole and the house with white walls and red roof, centre distance, was known as Plumpton Park in 1820 / Google Earth Street View.

In the Gest, King Edward is exasperated at noticing the scarcity of deer in Plumpton Park after Robin and his men have been poaching there during their stay with the knight. We should probably take this to be in Lancashire, but it is worth noting that Plumpton Park occurs as a field name in Hollingworth, Derbyshire. The source is an 1820 Enclosure Award.[1] As is usually the case with field-names, this Plumpton Park is not found on the 6" O.S. maps of the area.[2]

[Gest; c. 1500:]
All the passe of Lancasshyre
He went both ferre and nere
Tyll he came to Plomton Parke
He faylyd many of his dere.[3]