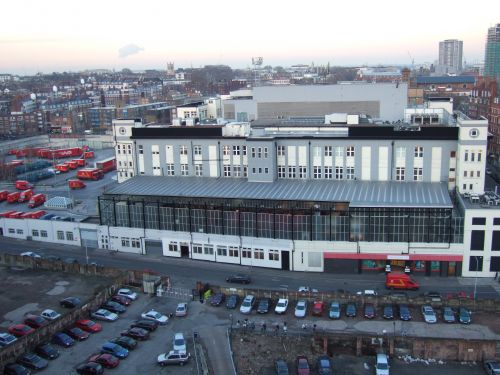 The Pinder of Wakefield's Fort is believed to have been situated in the area now occupied by the Royal Mail Mount Pleasant Sorting Office / Edward Betts, 7 Feb. 2007, Public Domain, via Wikipedia.

The Pinder of Wakefield's Fort was part of a ring of defences erected around the City of London in (mainly) late 1642 and through 1643. It is believed to have been situated in or adjacent to the area now occupied by the Royal Mail Sorting Office at Mount Pleasant. While there is thus little doubt about the fort's approximate time of construction and only slightly more about where it was situated, it is quite unclear how long its name remained in use. However, Daniel Defoe made the Pinder of Wakefield's Fort the scene of the eponymous character's first foray into the 'gentlemanly' trade of highway robbery in The History and Remarkable Life of the Truly Honourable Col. Jacque, published in 1723, at which time it was evidently still well known. About this time or a little later, people in the area began using the (site of the) fort as a dump, a fact which gave rise to the ironical (still current) street name 'Mount Pleasant'.[1] In all probability, the Pinder's Fort was named after the Pinder of Wakefield public house, located c. 750 metres to the north-west.

While the defences were already being considered in June of 1642 and some work was done that year, especially from October on, most of the construction effort seems to have taken place during spring to autumn of 1643. In May of that year, the Venetian ambassador reported that the main forts were ready to take artillery, while he noted that work on the connecting rampart and ditch were nearing completion. By October the defences were virtually complete and the ground in front of them had been cleared of obstructions to defensive fire. The c. 18 kilometre long line of defences ran north-west from Wapping to Shoreditch, and from there west to Hyde Park and south to Tothill Fields, resuming at Vauxhall on the south bank, running north-east to St Georges Fields, then east to the Elephant and Castle and thereafter north-east to Rotherhithe.[2]

No contemporary maps or plans of the works survive, only a couple of rough plans from 1720 and 1739 being known. There does not seem to be a clear picture of the exact number of defence works, their nature and positions. Only at three localities have possible remains of the fortifications been identified: in Hyde Park, in the grounds of the Imperial War Museum and at Rotherhithe. Much the most detailed source of information is the account of a perambulation of the defence works carried out by the Scots travel writer William Lithgow in April 1643 and published that year. He described 28 works but often did not locate them with such accuracy that they can be pinpointed on a modern map. The Pinder of Wakefield's Fort (see Lithgow's brief account under Allusions below) is believed to have been situated within the grounds of the present Royal Mail Centre at Mount Pleasant. However, Rosemary Weinstein, in a study of Southampton House (at the present Bedford Place) during the Civil War, briefly notes that '[w]alking westwards from Islington, Lithgow came to Pindar of Wakefield's Fort on the right of Farringdon Road near Exmouth Market.[3] Exmouth Market is situated on the east (which can of course also be the right) side of Farringdon Road, a few tens of metres from the north-east corner of the grounds of the Mail Centre. Unfortunately Weinstein does not tell us her reasons for locating the Fort within this rather more confined area adjacent to the Mail Centre.

A variety of shapes were chosen for the various forts, positions and batteries, that of the Pinder being 'onely quadrangled', and so evidently among the simpler ones. The forts were made of earth, and the major strongpoints at least had timber palisades.[2] William Lithgow described the fort at Wapping as being 'erected of turffe, sand, watles and earthen worke, (as all the rest are composed of the like)'.[4] while on the other hand, a fairly detailed drawing of the fortifications at Southampton House seems to show a crenellated brick wall.[5] William Lithgow's description of the Pinder's Fort is quite brief, which suggests that it was not one of the more impressive works. It must have been rather hastily built or not quite finished when Lithgow saw it in April 1643, for an Act of Common Council of 23rd February 1643, which authorised the construction of the defences, including those already made, 'called for a battery and breastwork on the hill east of Black Mary's Hole'. The Pinder's Fort must have been built in response to this.[6] 'Black Mary's Hole' is included, as 'Black Marys Well', near where the fort must have been, on maps dating from 1700 and 1720.[7]

Fortification efforts were motivated and spurred on by acute fear of an attack on London by the royalist forces in October 1642 and the spring of the following year. As it turned out, the king's forces never got closer to London than Brentford and Turnham Green, in November 1642.[8] In hindsight the fort-building effort could thus perhaps be said to have been futile. Yet defence against attack from the outside may not have been the only purpose of the forts. The Venetian ambassador observed that 'the shape they take betrays that they are not only for defence against the royal armies, but also against tumults of the citizens and, to ensure a prompt obedience on all occassions'. Very likely, therefore, they were designed to fire on internal as well as external enemies.[2]

Descending thence [from a place near 'Islington hill'] to Holburne fields I accoasted a strength, named, Pinder of Wakefields Fort, being onely quadrangled, pallosaded, and single ditched, and enstalled with five great Ordonance and a Court du guard.[9]

The poor man promised to lie still and make no noise, and did so; and had not above 11s. 6d. in his pocket, which Will took, and came back to the rest; but while they were together, I, who was on the side of the Pindar of Wakefield, cried, "Mark, ho !" too.[10]