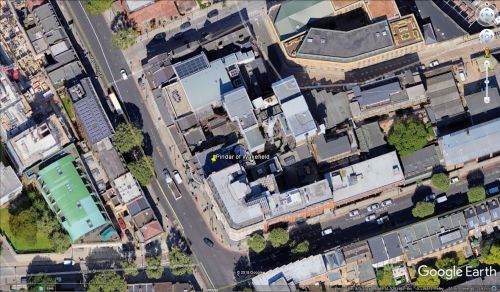 The former Pinder of Wakefield seen from the air. The passage was 'behind' it. probably meaning on the east side / Google Earth Street View.

I was a workman to Mr. Leader: I was coming out of the shop, and I overtook the prisoner with a piece of timber on his shoulder, about two or three hundred yards on the road: I followed him to the Pindar of Wakefield's, and down a little passage where he went in, and took it up stairs: that was his lodging: it seemed like a piece of timber about four foot long, more or less, and four or five inches thick: he had nothing else but his lanthorn: it was near six in the evening, and dark: it was the 17th of December, on a Friday.

I am a baker and constable of St. Andrews, Holborn. I went with a warrant, and told him my business, and asked him what he had done with that piece of timber that he lately brought home out of Mr. Leader's premises? he said, oh, here it is, in a very careless unconcerned manner: says I, fetch it out, and he brought it out of his room, at the first door in a narrow passage behind the Pindar of Wakefield's: he acknowledged it to be Mr. Leader's property: I neither threatened nor promised him: it was on the 17th of December, about half past eight the same evening: the man was very sober, and in bed: he is a watchman whom Mr. Leader kept to protect his premises: Mr. Lucas was with me: I could not be certain whether it was the first or second door.[4]

MARY ANN RENNETT. I am the wife of William Rennett, who keeps an eating-house in Joseph-street, Brunswick-square. On Sunday the 28th of July, my area was broken open, and this meat which hung in it stolen. I found it at the office on Monday.

SAMUEL CAYGER. I am a private watchman of Battlebridge. On Sunday the 28th of August, a little after five o'clock, the prisoners passed my box. I saw them turn up Joseph-street, and having suspicious, I called Colton, who took them half an hour after in Gray's Inn-lane, together with a third man. Marshall had something in a parcel under his arm; we stopped them both in a passage, and found the veal in the parcel - he said they found it - the prosecutor claimed it.

MARSHALL'S Defence. I picked it up in Pindar of Wakefield alley, in a cloth — I saw a man run down there.

CORKER'S Defence. I saw him find it.

[30 Jan. 1843:]
WILLIAM WEAVER. I am a coal and lime-merchant, and live in King's-road, Camden-town. On the 13th of Jan. I saw two carts belonging to Mr. Pratt in Gray's-inn-lane, opposite Fifteen-foot-lane, between ten and eleven o'clock—they were before me, going in the same direction as I was—the two prisoners were with them—I passed them—when I was at Britannia-street, which is some distance from Fifteen-foot-lane, I was about taking a cab—on turning round I saw the two prisoners in conversation together—after a short time I saw Barnard go round the cart, and take two nose-bags—they appeared full—he went down Fifteen-foot-lane, along Paradise-street, and into Britannia-street where I was at that time—I saw Mr. Griffiths coming along Britannia-street—I saw Barnard go into a shop in Britannia-street—I pointed that shop out to Mr. Griffiths—when he went in he had two nose-bags, and when he came out he appeared to have but one, and that was empty—he crossed Britannia-street, and went further along at the back of Chad's-row, and into Pindar-passage—I did not see him come out of Pindar-passage—Kennett was with the carts while Barnard went with the nose-bags—he drove the carts along the Gray's-inn-road till he came to Pindar-passage—the two front horses were brown, and one of the others was grey.

Cross-examined by Mr. PAYNE. Q. Which cart was it that something appeared to be taken out of? A. I think the hind cart, which had the grey horse in it.

JOHN GRIFFITHS. I was in Britannia-street on the 13th of Jan. last, about twenty minutes to eleven o'clock—Weaver pointed out a house to me—I saw no person go into that house, but I saw Barnard come out with the nose-bag on his back—it appeared empty, but the mouth of it was stuffed with straw—the house he came out of was 62, or 63, Britannia-street, which is one door beyond Paradise-street—he crossed Britannia-street, and went up George-street—I followed him—he ran away from me up Pindar-passage, which leads into Gray's-inn-road—I followed him, and he joined the team in the road, at the top of Pindar-passage, opposite Cromer-street—Kennett was with the team—I cannot say whether he spoke to Kennett when he joined him—I afterwards went with Archer to the house out of which I had seen Barnard come, and behind some coke sacks we found some corn, chaff, and grains—it was given to Archer, who took it away with him.[6]