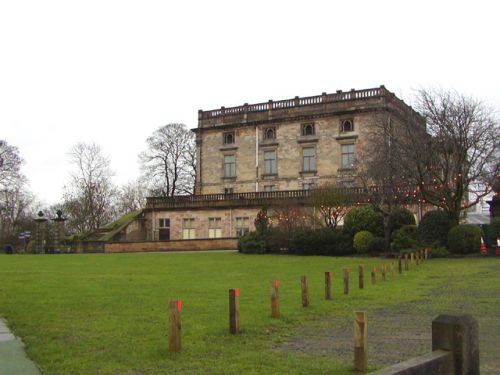 Nottingham Castle, built by William the Conqueror, sits in a commanding position on a promontory known as "Castle Rock", with 40 m high cliffs to the south and west. During the Middle Ages it was a major royal castle and an occasional royal residence. In decline by the 16th century, the castle was largely demolished in 1649. The Duke of Newcastle later built a mansion on the site, which was burnt down by rioters in 1831 and left as a ruin. This was later rebuilt to house an art gallery and museum, which are still in use. Thus not much of the original castle survives, but enough remains to give an impression of the layout of the site. Robin Hood-related art in the form of a statue, reliefs, and a topiary, is found within the castle grounds, mainly at or near the Castle's gatehouse.

While it has connections with Robin Hood, these are not really close. There are local traditions to the effect that Robin was imprisoned there, but also that the outlaws used caves in the sandstone beneath the castle as hiding places.[1]