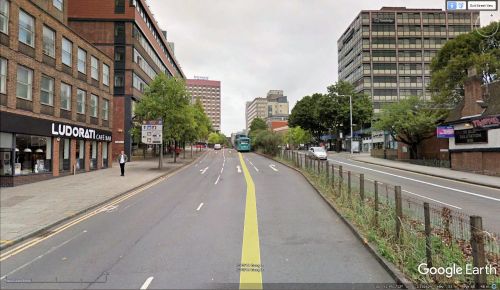 Planned in the years after WWII and constructed during the early 1960s, Maid Marian Way is a two-lane highway running through a central area of Nottingham.

In late 1945, Nottingham city council decided that a new road was needed to handle the steadily increasing volume of traffic passing through the centre of the city. The construction of Maid Marian Way was decided against the wish of many citizens by a council that ignored the opinion of at least one expert as well as criticism from the county history society, The Thoroton Society of Nottinghamshire, which declared the project an “antiquarian calamity”. A public vote in 1946 with a turnout of little more than 7 per cent failed to stop the project. After years of heated debate and strenuous protests, construction began in 1963. Several Medieval streets and many old houses had to give way for Maid Marian Way, which within a couple of years had come to be referred to, at least locally, as one of the ugliest street in Europe.[1] Today, when the trees have grown tall and we have become more accustomed to concrete, one may perhaps feel that Maid Marian Way is no worse than so many other city streets of the post-WWI era, but as is often the case with such developments, the real tragedy lies in what was lost. Part of this can be seen in a recommended publication in Nottinghamshire Archives' Turning back the Pages series (see Discussion below).

I am aware of just two major city planning and architecture mistakes with Robin Hood-related names: Nottingham's brutal Maid Marian Way and the brutalist Robin Hood Gardens in Poplar. The latter is now finally being demolished.