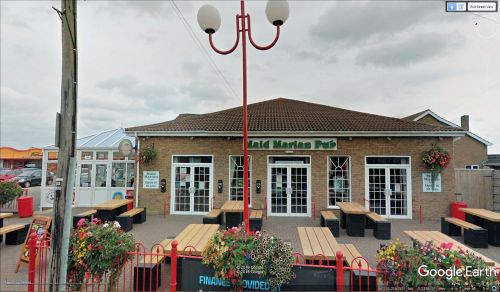 On the east side of South Road in Chapel St Leonards is a Maid Marian Pub. It is situated a few metres south of the entrance to the Golden Palm Resort, which was formerly named the Robin Hood Camp.

Maid Marian is included in Google Maps Street View imagery dated 2009 (see image gallery below) and looks so young that she can hardly be several decades older than this. The pub is situated opposite Club Tropicana which was formerly the Maid Marion Club. Immediately north-west of the pub once stood a wooden booth or shed that was home to the Friar Tuck Shop.

Pub not labelled or indicated on maps.