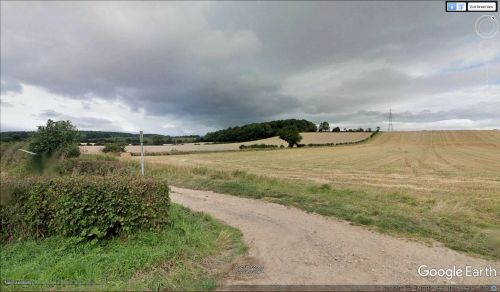 The first known source to connect Robin Hood with a locality named Loxley is the Sloane MS Life of Robin Hood from c. 1600. Loxley near Sheffield is no doubt the most well-known locality with this name, but there are several others, including one near Plompton in the West Riding, now North Yorkshire. This Loxley has not to my knowledge been connected with Robin Hood, but the fact that it is located in Plompton is interesting in the light of an allusion to Plumpton Park in the Gest of Robyn Hode. A. H. Smith cites the form "Loxlay" from a 1402 source and, from an 1817 source, "Louselay".[1]

The tithe award for Plompton (1847) does not include a locality named Loxley or similar, but this could simply be because no tithes were payable for that particular piece of land. On the other hand it sometimes happens that a plot of land later (or otherwise) considered to belong to a given township is included in the tithe award for a neighbouring one. Also at times it can be difficult for place-name researchers to decide in which of two neighbouring townships a locality mentioned in a record was located. There is good reason, therefore, to include the tithe awards for neighbouring townships in the search for this Loxley. An interesting candidate is the Lowsley Bank Field listed in the tithe award for neighbouring Little Ribston (1848). This was a strip of land that is now part of a larger field on the north side of Spofforth Lane about 2 km ESE of Plompton. It deserves serious consideration in view of the fact that Smith cites the spelling "Louselay" (1817) for the Loxley we are looking for, but perhaps an even better fit can be found at the north end of the township of Spofforth, just 400 meters west of Lowsley Bank Field and about 1400 m ESE of Plompton. Here two adjacent fields, the southernmost then nearly square, the northernmost then shaped roughly like a pentagon, are listed in the tithe award for Spofforth (1847) as Loxley Bank and Loxley Pasture. Either or both of these, I would suggest, is/are the field listed in Smith as Loxley under Plompton, but since they are so close to Lowsley Bank Field, it is of course possible that these three Loxleys were once parts of a larger area known by that name. The coordinates in the info box and used for the Google Map are near the centre of the area covered by Loxley Bank and Pasture.