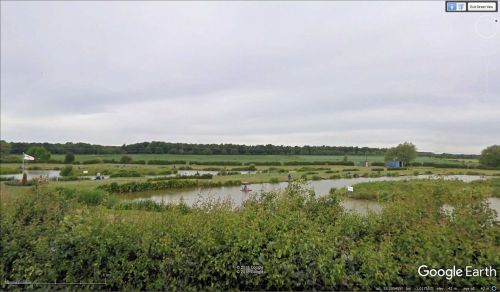 'Little John Lakes' is the name of three small artificial fishing lakes by River Maun on the west side of Maida Lane in Ollerton. The lakes are named Robin Hood, Maid Marion and Friar Tuck. Little John Lakes opened in 2006,[1] but it is not clear if all three lakes had been established by that time.

The three lakes are arranged along a NE–SW axis between River Maun and Maida Lane. Based on Google Earth and Maps Street View imagery, Google satellite view imagery, and videos of fishing competitions at the lakes uploaded to Youtube, it is my impression that the first lake to be established was Maid Marion, the northwesternmost of the lakes, then to the southeast Robin Hood, and further southeast Friar Tuck. For statistical purposes this facility has been entered as an 'Establishment', while the individual lakes have been categorized as 'Natural feature', which is paradoxically the best fit given the categories in use at IRHB.