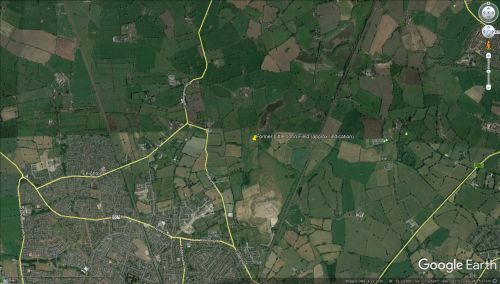 The field figures under this name in the 1838 tithe award for the 'Township of Elton in the Parish of Warmingham'. The landowner, was Lord Crewe, i.e. Hungerford Crewe, 3rd Baron Crewe (1812–94), the occupier James Walley. The area of the field is cited as 5 acres and 2 perches (20284.87 m2). No information was entered for 'State of Cultivation'.[1]

The tithe map does not appear to have been carefully made; the area looks quite different on the early O.S. maps listed below and on modern satellite maps, and it has not been possible to indicate the contours or exact extent and position of Little John Field on the satellite map shown below. However, the coordinate indicated would have been in or very near Little John Field, which would have been in the immediate vicinity of Micklewrights Flash, a little lake favoured by the angling community.