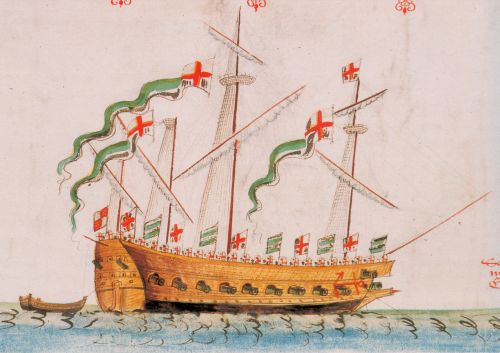 Little John was the name of a London-based ship which in 1591 intercepted a Spanish ship en route from Mexico or Spanish Central America to Havannah, Cuba.

Declaration of Michael Harris, of Blackwall, servant to Wm. Beckett, of Limehouse, delivered to Richard Gribble, Mayor of Dartmouth. Was taken, with other Englishmen, in June 1590, by two Spanish galleys, at Cape Browne by St. Domingo, carried to Carthagena and Nova Hispania, where he was commanded to serve in the Sancta Maria, laden with the King of Spain's treasure, and landed at the Havannah. The treasure was shipped at Nova Hispania, in 13 ships, all of which came to the Havannah save one, taken by the Little John of London, in which there were some chests of treasure. The King's treasure was in chests as big as two men could carry, and was landed at the Havannah last August, and put into the castle; assisted in carrying it there. Was divers times aboard the four frigates there; thinks them of 250 tons, with 14 pieces of brass ordnance. They intended to stay there until December or January, as very few men-of-war would then be on the seas to interrupt their passage. The principal men report that the English will seek to take the Havannah, and that if Sir Francis Drake does not take it, they do not fear all England. The Spaniards report that they have more friends in England than a bushel will hold of peppercorns.[1]