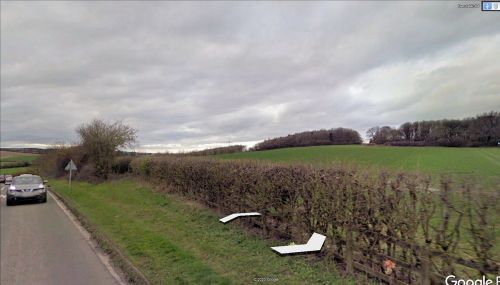 Little John's Wood, located c. 225 m north of Dunstable Road, about midway between Caddington and central Dunstable, was known under that name by 1880.

Like the later maps listed below, a 25" O.S. map of the area published that year, based on a survey carried out in 1879, includes the wood, labelling it 'Little John's Wood'.[1] It is shown with a roughly rectangular shape, measuring c. 210 x 85 metres, oriented NNW–SSE. At least as late as the mid-20th century, an open area separated Little John's Wood from Dame Ellen's Wood to the north. Now this area is also wooded, so that Little John's and Dame Ellen's woods form a larger continuously wooded area, together with the Cottage Bottom Fields nature reserve immediately to the west.

Given the presence of Dame Ellen's Wood in the vicinity of Little John's Wood we cannot be certain that the latter was named after Robin Hood's lieutenant. Though IRHB knows no evidence of this, it seems possible that an owner/occupier of the land could have chosen to name the woods after family members, including a son named John. If this was the case, he could hardly have failed to realize that outsiders would connect the name with the outlaw.

While all of Caddington now belongs to Bedfordshire, part of it, incuding the area in which Little John's Wood is situated, belonged to Hertfordshire until the late 19th century.[2]