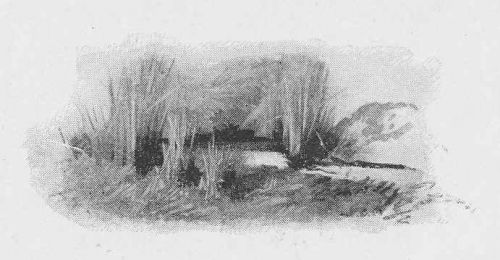 Little John's Well and the neighbouring Robin Hood's Well and Will Scarlet's Well high on Stanbury Moor were said in 1899 to be "[h]alf-hidden underground, and fringed with fern and bog-weed".[1]

Halliwell Sutcliffe's description, just cited, is quoted in full under Allusions below. While this is the earliest mention of Little John's well known to IRHB, Robin Hood's Well is first mentioned around the middle of the 19th century.

We'll [... p. 35:] strike round the sharp bend of the stream, and cross it, and continue along the further bank. We are on the first of the bogland now. There are patches of vivid green that yield to pressure of the foot with a spongy, gurgling subsidence. All full of little rills and rivulets the moor is, and there are wider patches of peat among the heather clumps. Half hidden underground, and fringed with fern and bog-weed, lie the three wells which go by the names of Robin Hood, Little John, and Will Scarlet. One may stop to ask how they came by their birth-names, to wonder why a man should have troubled to fashion them in this out-of-the-way spot; but neither speculation nor questioning of the moor folk brings one nearer to an answer. No house is here, nor even a shepherd's hut; yet the wells have been built for a definite use in some far-buried time. And the names? The springs are so called in old maps, and could not have been christened by any modern whose intercourse with the outer world was wider than that of the upland folk aforetime. Robin Hood one might understand, for [p. 36:] his name has long been current coin in the North; but how came Little John and Will Scarlet so glibly to the moorland tongue? Well Sherwood Forest is not so far away as the crow flies, and Hathersage, where Little John's grave is – where, by the way, the lady of quality who gave Jane Eyre her name lies buried also – Hathersage must have been joined to Haworth by a well-nigh unbroken sweep of moor. There was a wide manory about Skipton then, and as fat deer in it ever as roamed through Sherwood; Robin and his merry men found a change of scene convenient at times; and their safest route to Skipton would lie straight over the moor here, and across the valley this side of Oakworth, and on into the dale of Aire. It may well have been that Lincoln green lightened, more than once, the soberer livery of the heather; that plover and eagle screamed a fugitive defiance to the horn's challenge; that the long-bow of yew, and the merry wanderers who fitted the wild-goose feather to the shaft, were honoured guests among the ruder fathers of the moor. Ay, and men of his own kidney would honest Robin find — hard-muscled fellows who could bend a bow with the best, who held lax views as to equality of rights in feathered game and furred; for they were sportsmen ever in Haworth parish.[2]

Little John's and Will Scarlet's wells are not labelled on any of these maps.