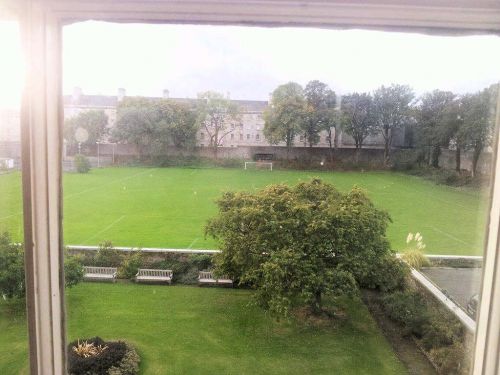 This football field is said to be what remains of Oxmantown Green; photographed from the premises of The Law Society of Ireland / Tweet by Hurdy Gurdy Museum. 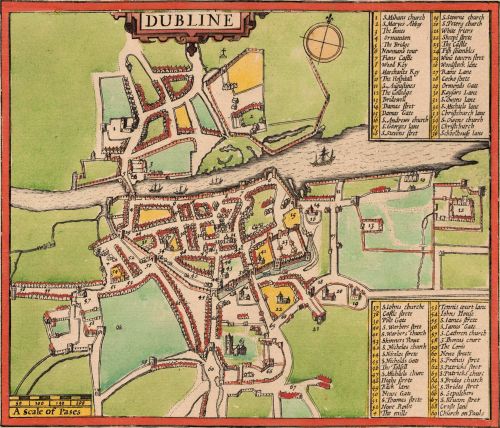 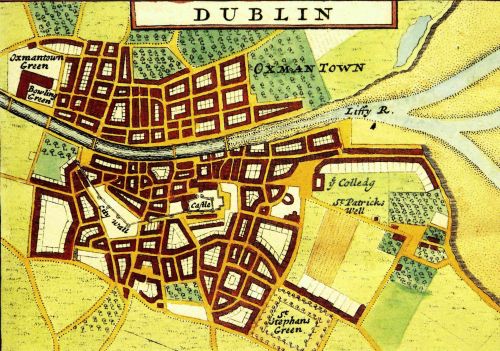 Little John's Shot was a hillock on Oxmantown Green, from which, according to a tale or tradition reported in the first edition of Holinshed's Chronicles (1577), Little John shot an arrow, standing on Father Mathew Bridge, then known as Dublin Bridge (see 1577 Allusion below).

The chronicle reports that Little John went to Ireland after Robin Hood's death and stayed in Dublin for a few days. Eager for a demonstration of the visitor's prowess with the longbow, the Dubliners "requested hym hartily to trie how far he could shoote at randone [sic]". Little John obliged, the arrow landing at "that mole hill, leauyng behynde him a monument, rather by his posteritie to be woondered, then possibly by any man liuyng to be counterscored". Unfortunately this feat led to the authorities becoming aware of his presence, so he hastily left Ireland for Scotland.

According to someone representing Dublin's Hurdy Gurdy Museum,[1] the lawn with a football field located between the premises of the Law Society of Ireland (to the east) and Collins Barracks (to the west; now housing the National Museum of Ireland – Decorative Arts and History) is all that is left of Oxmantown Green. Judging from John Speed's map of 1610 and that of Herman Moll of 1714 (both shown on this page), it does seem likely that the green area with the football field was once part of Oxmantown Green. Little John's arrow, if it landed about the centre of the present football field, travelled c. 660 meters, but in view of the reputation of Robin Hood and his men in the archery department it is not unlikely the arrow was thought to have landed a good deal further west. The intriguing account of 'Scald brother' in the chronicle suggests that the Green was then a quite extensive area, and John Speed's 1610 map shows more green (Green?) west of the city, north of the river, than the 1714 map. I have, nonetheless, used the centre of the football field for the coordinates indicated in the infobox and on the Google map.

Readers of a more cynical than romantic cast of mind will perhaps tend to explain the story of Little John's flight shooting as an etiological myth serving to explain the presence of a possibly conspicuous hillock on the Green. I have entered this locality in the infobox as a natural feature. This is what the description in Holinshed seems to suggest, but it may of course have been a small mound.

The names of the fieldes adioyning to Dubline.
SAint [sic] Stephens greene.
Hoggyng greene.
The Steyne.
Ostmantowne greene. In the further ende of this field is there a hole, commonly termed Scald brothers hole, a Laberinth reachyng two large myles vnder the earth. This hole was in olde tyme frequented by a notorious théefe named scaldebrother, wherin he would hyde all the bag and baggage he could pilfer. The varlet was so swifte on foote, as he hath eftsoones outrún the swiftest and lustiest yong men in all Ostmantowne, maugre theyr heds, bearing a potte or a panne of theyrs on his shoulders, to his den. And now and then, in derision of such as pursued hym, he would take hys course vnder the gallowes, which standeth very nigh hys caue (a fitte signe for such an Inne) and so beyng shrowded within his lodge, he reckened himself cocksure, none beyng found at that time so hardy as would aduenture to entangle himselfe within so intricate a maze. But as the pitcher that goeth often to the water, commeth at length home broke: so this lusty youth would not surcease from open catchyng, forcible snatchyng, and priuy prowling, to time he was by certain gaping groomes that late in wayte for him, intercepted, fleeing towards his couch, hauyng vpon his apprehension no more wrong done hym, then that he was not sooner hanged on that gallowes, through which in his youth & iollitie he was wont to run. There standeth in Ostmantowne greene, an hillocke named little John hys shot. The occasion procéeded of this.
In the yere 1189. there ranged thrée robbers and outlawes in England, among which Robert hoode and little Iohn were chiefetaines, of all théefes doubtlesse the most courteous. Robert hoode beyng betrayed at a Noonry in Scotland called Bricklies, the remnaunt of the crue was scattered, and euery man forced to shift for himselfe. Wherupõ little Iohn was fayne to flie the realme, by sayling into Ireland, where he soiourned for a few dayes at Dubline. The citizens beyng done to vnderstand, the wanderyng outcast to be an excellent archer, requested hym hartily to trie how far he could shoote at randone. Who yeldyng to their behest, stoode on the bridge of Dublin, and shotte to that mole hill, leauyng behynde him a monument, rather by his posteritie to be woondered, then possibly by any man liuyng to be counterscored. But as the repayre of so notorious a champion, to any countrey, would soone be published, so his abode could not be long concealed: and therefore, to eschew the daunger of lawes, he fled into Scotland, where he dyed at a towne or Village called Morany. Gerardus Mercator, in his Cosmographye affirmeth, that in the same towne the bones of an huge and mighty man are kept, which was called little Iohn, amõg which bones, ye huckle bone or hipbone was of such largenesse, as witnesseth Hector Boethius, yt he thrust his arme through ye hole therof. And the same bone beyng suted to the other partes of his body, did argue the man to haue bene 14. foote long, which was a prety length for a little Iohn. Whereby appeareth, that he was called little Iohn ironically lyke as we terme him an honest man, whom we take for a Knaue in grayne. [...][2]