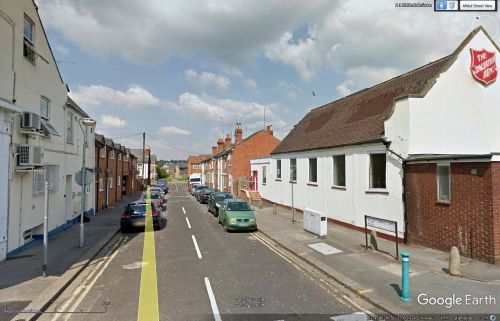 The southern part of Little John's Lane is now only connected with its continuation north of Portman Road via paths and a short, apparently unnamed street. Looking north from Oxford Road / Google Earth Street View.

Through housing development during the 20th century the southern part of Little John's Lane, running roughly south-north from Oxford Road to Sherwood Street, has become detached from the part of Little John's Lane that continues north from Portman Road in Reading. Judging from Google Earth, it is still possible for a pedestrian (or perhaps a bicyclist not too concerned about traffic regulations) to follow, more or less closely, the course of the lane for much of its length, but there are now in reality two separate streets in Reading officially named 'Little John's Lane', as indicated on street signs. Why should the postman's life be easy?

I do not know when Little John's Lane became bi-, tri- or multi-sected, but the map evidence and the general look of the buildings in the area make it clear that this happened during the 20th century. The 25" O.S. map of the area published in 1934 (see Maps section below) includes separate labels for the south and north ends of the lane and also indicates a gate, fence or similar separating the two, but the lane is still essentially, as it were, in one piece, no part of its course being then blocked by buildings. See further Little John's Lane (Reading) (1).