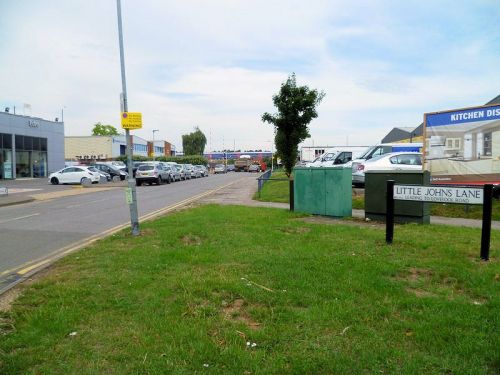 Little John's Lane in Reading originally followed a course slightly east of due north from what is now Oxford Road (just before No. 534), crossing Sherwood Street and Fulmead Road, turning slightly east at Thornton Mews to continue north across Portman Road. However, development during the 20th century has bi-, if not tri- or multi-sected it, so that there are now two streets named Little John's Lane on official street signs, one connecting Oxford Road and Sherwood Street, the other running north from Portman Road, while between the two, north of Sherwood Street to a point just south of Thornton Mews, the lane is a mere tarmac path for pedestrians, which is broken off by at least one fence but picks up on the north side of Thornton Mews. North of Portman Road, the lane leads to Little John's Farm, where the annual Reading Festival is held. I wonder if the fence or fences were put up to make sure festival-goers take another route?

For ease of reference map evidence for the southern Little John's Lane are included here, though it has its own page.