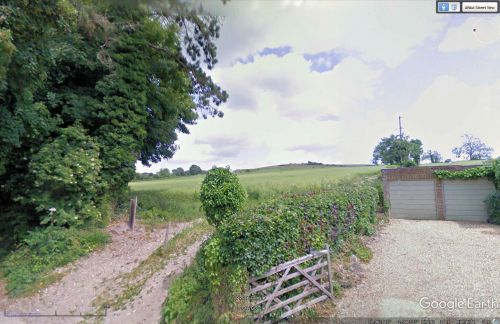 Looking ENE from Earthpits Lane in Pentridge, Dorset. Little John's Ground was the name of an area within this close / Google Earth Street View.

'Little John's Ground' was the name of an area in a close on the east side of Earthpits Lane in Pentridge, immediately southeast of Whitey Top Farm. First recorded in the 1838 tithe award for Pentridge, this field name is noted in the Place-Names of Dorset (1989), but the present entry would seem to be its debut on the world wide web. The 1838 tithe award lists the close as "Little Johns Ground or Whites Hill and Stony Closes", its state of cultivation as arable, its area as 17 acres, 2 roods and 5 perches (70946.45 m2). The close was then owned by Cropley Ashley-Cooper, 6th Earl of Shaftesbury, and occupied by William Gilbert Goddard, Esq.[1]