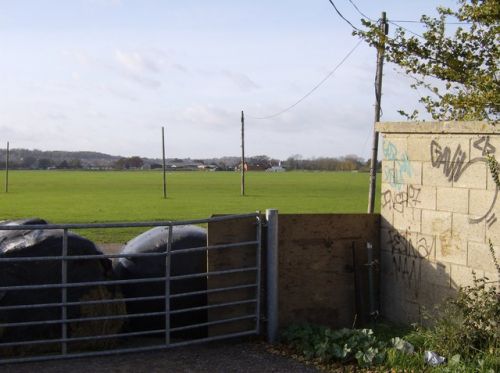 At Little John's Farm, when it is not hosting the Reading Festival / Graham Horn, 2007, Creative Commons, via Geograph.

Little John's Farm is situated between the Thames and the tracks of the Great Western Railway in an area that is now a well-known venue for outdoor concerts, most famously the annual Reading Festival.

On O.S. maps of the area published in 1882, 1897 and 1899 (see Maps section below), the locality is indicated as "Little John's" tout court. The EPNS volume on this part of Berkshire also lists it under that short form but refers as its source to John Snare's c. 1846 map of Reading and environs on which the name is cited as "Little Johns Farm" (see Maps section below).[1] I have found a slightly older source: the 1843 tithe award for Tilehurst lists the plot as "Little John'shomestd" (sic), i.e. Little John's homestead, with an area of 21 perches (531.15 m2), the owner a Knollys John Weldale, the occupier a John Clarke, leaving "State of cultivation" blank, since as a homestead it was not under cultivation.[2]

It is not known how Little John's farm acquired its name. Perhaps it was once owned/occupied by a family surnamed Littlejohn? In all events, Little John's Lane, leading to the farm, seems much more likely to have been named after it than vice versa.