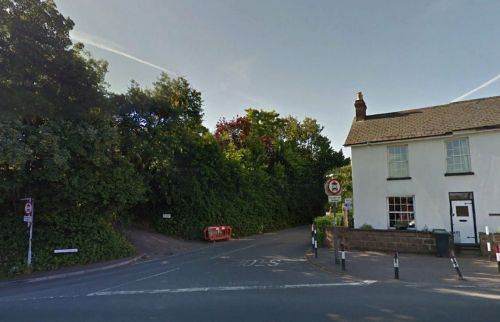 Little John's Cross stands in the garden behind the traffic sign at the right side of the road / Google Earth Street View (click photo to enlarge).

Little John's Cross is a wayside cross in Exeter at the corner of Dunsford Road and Little John's Cross Hill. The cross, now standing in a private garden, takes its name after a local family surnamed Littlejohn and is thus in its origin hardly related to the Robin Hood tradition.[1] However, the spelling "Little John" obviously bears witness to, as well as encourages, reinterpretation along such lines, and thus we find an early 1990's private residence on Little John's Cross Hill named Sherwood Rise.[2] The cross is marked without a legend on Ogilby's 1675 map.[3]