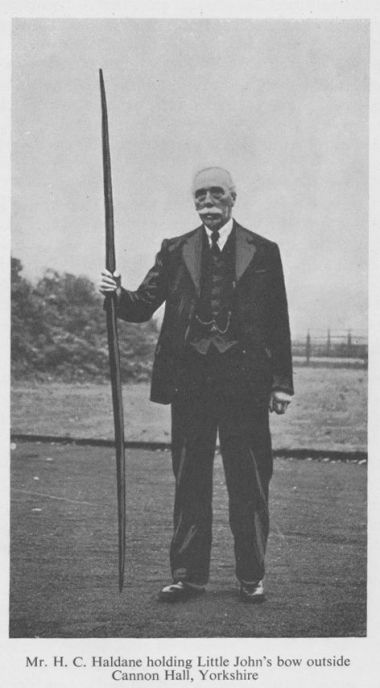 A bow, some arrows, a helmet and some chain mail that had allegedly belonged to Little John hung in Hathersage Church until about the middle of the 18th century. According to the quotation below, the bow and helmet were in the collection at Parham House (Sussex) by 1868. This conflicts with another account of the fate of these relics,[1] according to which, on the death of Benjamin Ashton, the Hathersage estate passed to his sister Christiana who in 1715 married William Spencer of Cannon Hall, near Barnsley. In the mid-18th century, William or his son John (d. 1775) had Little John's bow and armour removed from Hathersage Church to their home, allegedly to protect these items as the church was in a bad state of repair. William Spencer's daughter Ann married Walter Stanhope (who assumed the surname Spencer-Stanhope). The bow remained at Cannon Hall with the Spencer-Stanhopes and was also housed there several years after Barnsley Corporation acquired the house in 1951. However, it would appear that a J. Spencer-Stanhope had bequeathed the bow to his daughter Elizabeth, who married Lieutenant-Colonel, later rear Admiral, George Fraser in 1920. By 1980, their son, Simon Fraser, had removed the bow to his home in Scotland.

According to legend, Colonel Naylor strung the bow and shot a deer with it in 1715. The bow, c. 2 meters in length, is said to be made of spliced yew and have the traditional horn nocks or tips. It weighs about one kg; drawing it takes an 80 kg pull. So is Little John's bow at Parham in Sussex or somewhere in Scotland? Or perhaps one bow became two? It would not be the first self-replicating relic in history.