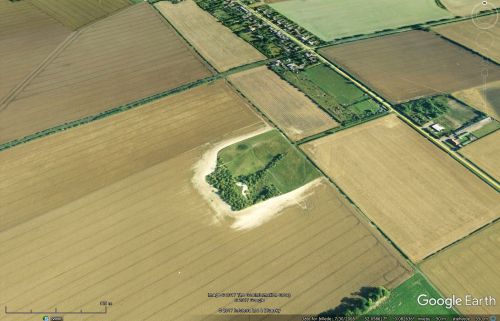 According to local tradition, Robin Hood shot an arrow from the mound on Limlow Hill 700 m to the east which, according to one version, landed in the chalk pit and grew into a thorn tree. Another variation is that the arrow fell on Ermine Street c. 2.5 km away. Whichever way the arrow fell, the tradition was supposedly commemorated in the name of the Robin Hood & Little John inn in Litlington, which was established by 1811 and closed in 1910. Its is hardly possible to say how much older this tradition may be. The chalk pit is now a County Wildlife Site under habitat restoration managed and owned by the South Cambridgeshire District Council.

One source [Courcy-Ireland[1]] says that the arrow fell in the village chalk pit (now disused, [...] a few hundred metres across the road from the hill), and there grew into a thorn tree. By 1811 an inn (which closed in 1910) in the village had been named the Robin Hood & Little John, supposedly after this legend.[2]