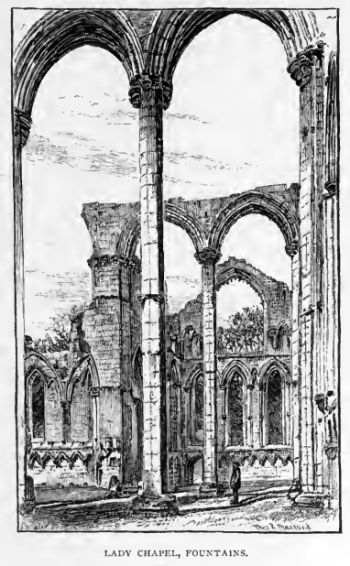 A bow and arrow engraved on the wall of the Lady Chapel at Fountains Abbey may, it has been suggested, be the source of a tradition that Robin Hood's bow and arrow were kept at the abbey.

Now, all attention is naturally centered in the abbey, and fortunately, there is nothing intervening to distract the eye. We begin, immediately, to hasten down a precipice, arched, [p. 89:] deeply and picturesquely, in the woods; and, on arriving at the path by the side of the stream, will perhaps scarcely glance the diversity of scenes which the union of the dense woods with their liquid mirror presents.

Yet awhile may fancy beguile us with merry visions of the past. On this glade — doubt who can — the "Curtal Friar" of Fountains encountered Robin Hood, whom, as the old ballad goes, he at length threw into the Skell, and so grievously belaboured, that Robin, for once, turned coward, and called in the aid of his fifty stalwart yeomen; also that then the Friar, who

was brought to his senses and a truce. Before we reach the abbey, we shall be reduced to halt on a shady knoll; and, while reclining by the crystal Well that still bears the Outlaw's name, may chant the "Rime of Robin Hood" in one of the sweetest spots associated with his name.

Tradition points to the figures of a large bow and arrow and hound, graven on the north-east angle of the Lady Chapel, as a record of this dire affray. They bear no affinity to the symbols used by the masons; but have, I fancy, induced the report, mentioned in Ritson, that Robin's bow and arrow were preserved at Fountains Abbey.[1]