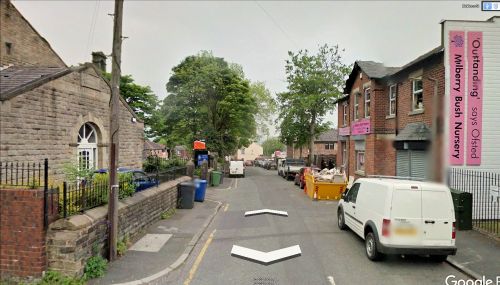 In the mid-19th century, Kirklees Street was named Sandy Lane, but by 1893 it had acquired its present name. It extends about 700 m east from Market Street, Tottington, to a locality formerly (or still?) known as Kirklees. Its connection with Robin Hood is indirect. In view of Kirklees Priory, some 40 km to the east, being the alleged scene of Robin Hood's death and the site where he is allegedly buried, it seems likely that the name 'Kirklees Street' and the name of the locality to which it led, together with those of the Robin Hood and the long-defunct Robin Hood Brewery, helped inspire that of Sherwood Close, a side street on the north side of Kirklees Street.

The earliest sources for the name are the 25" and 6" O.S. maps of the area, dating from 1893 on, which are listed below. See further the page on Kirklees (Tottington).