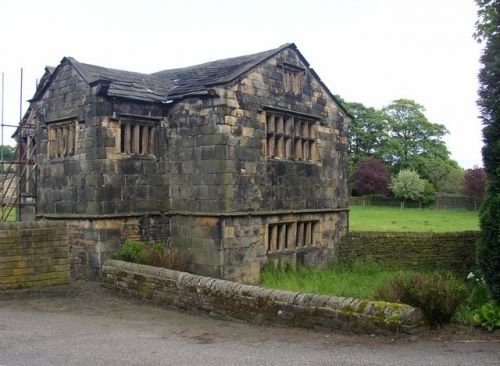 The gatehouse at Kirklees is where, according to tradition, Robin Hood shot his last arrow and died. He was to be buried where the arrow landed (see Robin Hood's Grave). The gatehouse is the only part of Kirklees Priory left, and it seems to have been extensively rebuilt during the Elizabethan period. At a talk he gave to members of the Yorkshire Archaeological Society in 1906, the then owner of the Kirklees estate, George John Armytage, had this to say about the gatehouse:

There is a mention of an old almshouse without the gate, and another, 40 feet long and 18 feet broad, by the beck side. This may refer to the present gate-house now standing [...]. This is supposed to be the house in which Robin Hood died, but that is another history, to which I do not propose to refer to-night. Mr. Bilson, however, thinks that this is a post-dissolution building. It has evidently been built at two different periods, the wooden portion being older than the stone.[1]

The B version of the ballad of Robin Hood's Death (c. 1767) ends with what is the earliest version of the famous scene of Robin Hood's death, where the outlaw shoots an arrow at random, asking to be buried where it lands. Although the ballad is silent about this, it was widely believed that the Gatehouse at Kirklees Priory was the scene of Robin Hood's death. Popular tradition connects several other pairs of localities through arrows shot by Robin Hood and/or Little John. For these see the page on Places connected by bowshot.