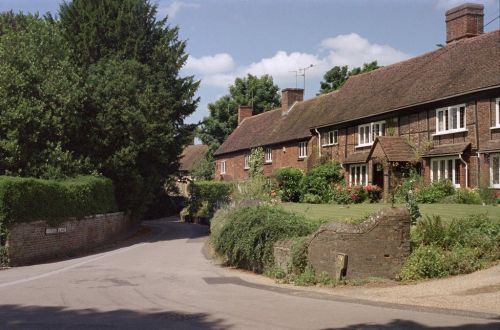 The name of the village of Ivinghoe, roughly 10 km south of Leighton Buzzard, is believed to have been the inspiration for the title and the name of the eponymous hero of Walter Scott's Ivanhoe (1820). This, easily Scott's most famous novel, is probably the most widely known and most influential historical novel ever published. Robin Hood, Friar Tuck and the other outlaws are important subsidiary characters and allies of the hero of the novel. It is probably fair to say that in terms of significance to the Robin Hood tradition it is rivalled only by the Gest of Robyn Hode and Howard Pyle's Merry Adventures of Robin Hood.

The place-name 'Ivinghoe' is first recorded in Domesday Book (1086), in the form "Evinghehou",[1] from OE Ifinga-hō(g)e, "the hoh ['projecting ridge of land, a promontory'[2]] of Ifa's people". Allen Mawer notes that Ivinghoe is located "at the base of a considerable spur of land jutting out from the main range of the Chilterns".[3]

The following passage from Mawer is worth quoting in full:

The curious way in which Scott, who is always thought (and probably rightly so) deliberately to have altered Ivinghoe to Ivanhoe, actually hit upon one identical with a form found in documentary evidence in the 17th cent. (not then published) is worthy of note. The coincidence is the more remarkable seeing that an for ing is without parallel in other p[lace].n[ames].[4]

"Tring, Wing and Ivinghoe." The earliest authority for the rhyme:—

"Tring, Wing and Ivingo
The (these) Hampden did forgo
For striking of a blow
And glad he could 'scape so,"

is in the return made by John Yale, rector of Great Hampden to Willis's circular of interrogations, 1712. Yale says: "There is an antient Tradition of King Edward 3rd and his son Edward, the black prince's being entertained at Hampden. But the Prince and Hampden exercising themselves in feats of Chivalry, they differed and grew so hot that Hampden struck the Prince on the face, which made the King and prince go away in great wrath upon which came this rhyme."

The story is fiction made to fit an old rhyme, the lines are probably from a royalist ballad and indicate that Hampden must be dislodged, and Tring, Wing and Ivinghoe held by the royalists. There are many modern variants of the rhyme. Sir Walter Scott borrowed the last of the three place-names for his novel Ivanhoe, and printed the stanza in his preface, somewhat incorrectly, as he wrote from local tradition.[7]