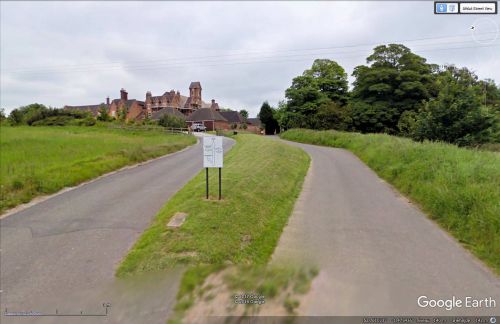 As close as we can get to the former Ivanhoe House with the Google Street View car. The building with the tower must be the house formerly known as Ivanhoe House / Google Earth.

Immediately north of a fish pond in Cliftonthorpe, 1 km SE of Smisby, in an area that is now in the north of Ashby-de-la-Zouch, was located Ivanhoe House, according to the 6" O.S. map of the area published in 1886 but based on surveying done in 1881-82. When the map was issued in 1904 (revised 1901), Ivanhoe House no longer had a name indicated (see Maps section below).