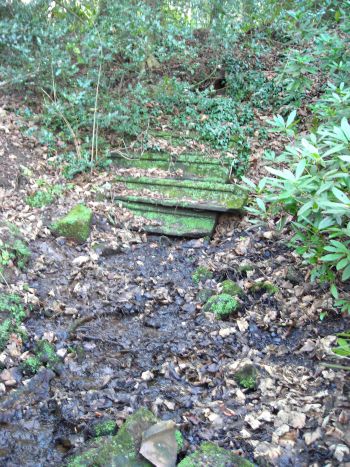 Friar Tuck's Well is situated on the east of Fountain Dale. This chalybeate spring once was surrounded by a low wall and an ornate iron railing; the water emerged from a pipe, traces of which can still be discerned as a dark patch close to the top of Antony Dixon's photo below, and trickled down the "stairs" seen in the centre of the photo. Its waters were believed to possess medicinal properties. The well is now overgrown, the immediate surroundings boggy and the stonework broken.[1]

IRHB user Rich visited the locality in mid-September of 2020 and mailed me a photo with some comments. Such contributions are always received with thanks. You can contact IRHB via the form on th eContactpage. You can see Rich's photo in the gallery below. Here are his comments:

I was having a ride down Fountain Dale near Blidworth earlier today and stopped off to see if I could find Friar Tuck's Well. I've been down that way before so I had a rough idea where to look. There wasn't much to see – even less than what I remember from the last visit I made, and it looks like there's been some improvements to the dam next to the well which may have affected it. I've attached a photo of what I could see – not much – but it might give others looking an idea of what to expect.